Bringing Bt Brown's history to life for the young

Bringing Bt Brown's history to life for the young 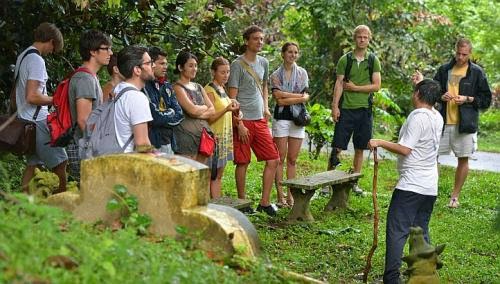 Overseas students from a three-week programme at the Future Cities Laboratory exploring Bukit Brown cemetery last month. Since the historical site popped up on the public radar in 2011, it has been attracting a younger crowd, with more than 20 schools organising trips there for their students. -- ST PHOTO: KUA CHEE SIONG


ONCE upon a time, it was only heritage and nature buffs who visited. But in recent years, Bukit Brown cemetery has been attracting a younger crowd.

The historical site popped up on the public radar after plans to build a highway cutting through it were announced in 2011.

Since then, more than 20 secondary schools, junior colleges and polytechnics have organised trips for students, guided by tomb explorer Raymond Goh and other volunteers.

In March, 450 Raffles Girls' School students visited the cemetery. "We wanted them to experience Bukit Brown, rather than hear and read about it," said teacher Regina Lee, 46.

Student Angelia Lau, 16, who was there for the first time, said: "The number of enthusiasts in Singapore who would go out of their way to educate others about what they are passionate about heartens me."

Temasek Junior College took 54 young people to the cemetery in May. Vice-principal Samuell Ang said the tour was an opportunity for students to "see the connections between issues discussed in lessons and the on-going preservation efforts of Bukit Brown".

In language arts and humanities classes, students learn about the effects of urbanisation on the environment through literary texts. After the tour, they are encouraged to write poems about history and memories.

"The learning journey really taught me how to appreciate our culture and roots as I never knew there was so much significance behind every tombstone," said student Caleb Chia, 16.

The cemetery has also attracted people from outside Singapore. Last month, Mr Goh gave a tour to 30 students who were here for a three-week summer programme at the Future Cities Laboratory, which researches urban planning.

Among them was 30-year-old Tomas Janusas, an architecture and city planning graduate from the University of California, Berkeley, who is doing his master's in the same subject in September. "It is one of the most emotionally, spiritually and historically charged places in Singapore I have visited so far," he said.

Some students have chosen to "document" the cemetery through projects.

Mr Goh, 49, a regional director of a health-care company, has been conducting tours at the cemetery for the public since 2007.

He said he is glad younger people are showing an interest in the site. "It is where they learn things in an authentic setting, things that history textbooks don't say."