The forgotten heritage at our own backyard

On Jun 19, 2012, the Government of Singapore officially deposited with the Director-General of UNESCO its instrument of ratification, becoming the 190th State Party to accept the Convention concerning the Protection of the World Cultural and Natural Heritage.

On 19 Sep 2012, Singapore becomes 190th State Party to the World Heritage Convention.
On 7 Dec 2012, Singapore National Commission for UNESCO submits its Botanic Gardens on the Tentative List, which Singapore consider to be cultural and/or natural heritage of outstanding universal value and therefore suitable for inscription on the World Heritage List.
But yet, do you know we can have another cultural and natural heritage of outstanding universal value, one that is still yet unappreciated by the public at large, and that the government
is planning to drive a highway through it to alleviate traffic congestion?
If we are to check the tripadvisor website, we would be surprised at the excellent reviews of the place there.
http://www.tripadvisor.com.sg/Attraction_Review-g294265-d2547770-Reviews-Bukit_Brown_Cemetery-Singapore.html
Why is this so?  Is it not merely a cemetery of tombstones and bones?   The government has cleared many cemeteries in the past.  What makes this cemetery so special?
Week after week,  more and more people from all walks of life, tourists, students, children and housewives are coming to Bukit Brown and beginning to realize the significance historical and cultural importance of this place.
For those who have been there and walk the grounds,  each and everyone is touched and awed by the sights and sounds they can see and feel at Bukit Brown, a hidden historic gem
that awaits discovery. 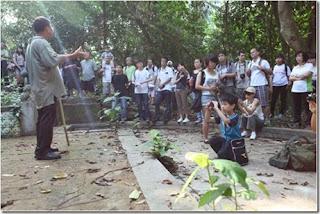 History and Heritage
For the cosmopolitan Singaporeans, it still come to them as a surprise that the Bukit Brown area is the largest Chinese cemetery complex in the world, with more than 200,000 tombs
(The greater Bukit Brown is estimated to be about 233 hectares in size and encompasses the municipal Bukit Brown Cemetery and 3 other adjacent cemeteries)
It is also the mother of all cemeteries in Singapore, whereby graves from previous cemeteries were re-interred in Bukit Brown.
As recently as a few months ago,  the tombs of the first batch of  pioneers who came during the time of Sir Stamford Raffles, dating all the way back to the 1820s was
discovered in the greater Bukit Brown area. In fact, many of the history and heritage of this place is just coming into light within these 2 years.
Recently the government has started to promote Sun Yat Sen Memorial Hall (Wan Qing Yuan)  a heritage institution under the National Heritage Board, which traces Dr. Sun's revolutionary activities in the Southeast Asian region and highlights the impact of the 1911 Chinese Revolution on Singapore as well as Singapore's contributions to the Revolution.
And yet, few would know that the only place worthy to be a Revolutionary Mausoleum, whereby 20 members of the Tong Meng Hui (Chinese Revolutionary Alliance) members who supported Dr Sun and 15 members of the early Chinese Republic Party formed at that time is actually at Bukit Brown. 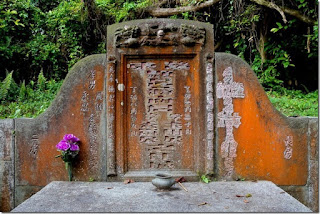 Inscription : A Revolutionary alliance pioneer and overseas Chinese representative with foresight
More than a century of transition of power and change in China can be reflected in the tombstones of Bukit Brown, from the Qing dynasties of Daoguang, Xianfeng, Tongzhi, Guangxu, Xuantong,
period where great changes take place like the Taiping rebellion, the remnants of the Qing dynasty after the Republic is formed, the Republican Year, Mingguo,
followed by the Japanese conquest of Koki years, Syonan years. Also included is the two thousand year old Confucius calendar
These combined calendar system are unique in the world.
Singapore, being the crossroad of the east and centre of Nanyang, we can see the shared history between its neighboring countries, like Malaysia, Thailand, Indonesia being reflected in the tombstones
of Bukit Brown. There is also a very rich material unique culture of the Peranakan reflected in the tombs of Bukit Brown. 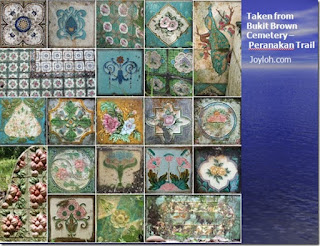 Also found are more than 30 pairs of stone Sikh guards, most of them unique, and believed to be modeled after real Sikh guards/photos 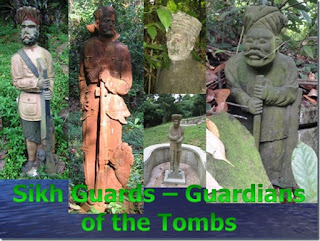 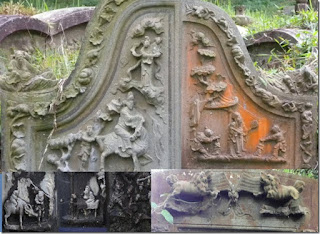 For the municipal cemetery of 100,000 tombs, each and every tomb is recorded with name, address, age and other details, Together with the tombstone inscriptions,
each tomb can tell a diasporic journey from a village in China to Singapore.   There are also clusters of tombs that denigrate families, friends, societies, religious and business relationships
All these are buried irregardless of religious and dialect groups.
Different religious and cultural beliefs and different Chinese dialect groups, Hokkiens, Teochews, Cantonese, Hakka, Hainanese
reflecting the Chinese diaspora from southern China into Nanyang.
Few would also know that Bukit Brown is also a war cemetery. Thousands of unidentified bodies were buried in communal trenches which so far lay undiscovered.
WW2 battles were also fought on the hills of Bukit Brown
More than 30 pioneers buried there have streets in Singapore named after them. Also buried are founders of schools, banks, clan associations.
Nature:
As highlighted by Nature Society of Singapore, Bukit Brown is a Natural Air-conditioner, contribute to carbon sequestration, act as rainfall sponge, and has 25% of the total bird species recorded in Singapore (91 out of 364 species). Of these, 13 bird species found in Bukit Brown are nationally threatened.
There has also been recent sighting of large flying fox thought to be extinct in the main island. Other fauna include butterflies, snakes, monkeys, pangolins etc 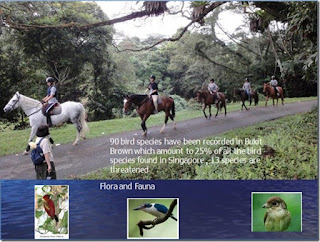 It is currently in active use for horse riding, cycling, hiking and other recreation activities.
In conclusion, it is a living museum like no other and what we are searching for, our shared identity, our roots, our heritage, a cultural gem that future generations can benefit, that is uniquely Singaporean can just be found in our own backyard.
For those who has come to Bukit Brown and experience it for themselves,  it is a live on-site museum, touch stones of living memories, the physical and emotional anchors for the future generations of Singapore that can root them and make them feel connected.
As the conclusion for the video "Finding Bukit Brown" produced by a group of final-year students at the Wee Kim Wee School of Communication and Information aptly put it :

"It is this collective memory that differentiate a home from a hotel. For Singaporeans who want something to hold on to, there is no need to look any further than one's own backyard".
Raymond Goh
Stories