So when news surfaced two weeks ago that it had quietly launched a bid to get the Singapore Botanic Gardens listed as a Unesco World Heritage Site last December, more than a few people interested in heritage were surprised.

Now some are asking if other sites are worthy of nomination as well, and suggest, among others, Tiong Bahru and the Bukit Brown cemetery.

Singapore cleared the first round and got on the tentative list last December. Now consultant Chris Blandford Associates - who got London's Kew Gardens listed as a World Heritage Site in 2003 - is crafting the dossier, which it hopes to submit by next February.

The whole effort goes back to 2009, when the Singapore Heritage Society first suggested nominating the Botanic Gardens. The following year, the Government roped in foreign consultants to identify Singapore's best shot.

Up for consideration, besides the gardens, were the Civic District, Bukit Timah Nature Reserve, Haw Par Villa and the former Ford Factory where the British surrendered to the Japanese in 1942.

The National Heritage Board (NHB), the agency driving the Unesco bid, said sites such as the Bukit Timah Nature Reserve, Ford Factory and Haw Par Villa did not make the cut as "many of the formal criteria for natural or cultural heritage sites were not met".

The list was eventually whittled down to the Botanic Gardens, the Civic District and historic cultural enclaves of Little India, Chinatown and Kampong Glam.

That Malacca and George Town in Penang were already on the Unesco list gave hope that Singapore's historic districts might stand a chance too.

"The problem would be the protection of these sites and possible developments in future," said Dr Chua Ai Lin, a historian and vice-president of the Singapore Heritage Society.

Leading Malaysian conservationist Laurence Loh, who was instrumental in getting George Town listed, felt Singapore's best bet after the gardens was to package the historic cultural districts together.

"But Singapore has demolished so much of its heritage and every one of your cultural site settings has been compromised," said the architect, whose conservation projects like Penang's Cheong Fatt Tze Mansion, the Merdeka Stadium in Kuala Lumpur and Cheng Hoon Teng Temple in Malacca have won him Unesco Asia-Pacific Heritage Awards.

It is a sentiment echoed by heritage conservation expert Johannes Widodo, a jury member of the Unesco Asia-Pacific Heritage Awards. He said of Singapore's cultural districts like Chinatown: "What's left is a shell. There is no more soul. Everything has been commercialised."

Indeed, authenticity counts for a lot. A recent survey on the intangible cultural heritage of George Town found more than 600 traditional trades in operation, some more than 100 years old.

"We may not be as strong as Penang on this front," conceded Dr Chua. "Our historic districts have changed so much."

And since a key criterion for Unesco is protection of land around the site - a buffer zone - the civic and historic cultural districts soon fell out of the reckoning.

"With the demand on Singapore's land and the need to maximise land use, it will be difficult to limit and ensure that the landscape of the civic district and historical cultural enclaves is preserved if successfully inscribed as a World Heritage Site," said the NHB.

In the end, the Botanic Gardens was the clear winner. If it gets Unesco's nod, it will be in the company of China's Great Wall, Jordan's Petra and India's Taj Mahal.

News of the bid has sparked discussion about other possible sites, notably Tiong Bahru and Bukit Brown. Neither was on the government short-list.

The Singapore Improvement Trust pre-war Art Deco flats of leafy Tiong Bahru, a favourite of heritage buffs, were given conservation status by the Urban Redevelopment Authority (URA) in 2003, which means they already enjoy protection. Unesco expects World Heritage Site nominees to be protected by local laws.

Another factor is that it is still a living community and a showcase of how public housing designed in the 1930s remains relevant.

Yet, what might stand in the way of a Unesco bid might well be Tiong Bahru residents themselves.

"My own reservation about the place is that you might not get key stakeholders to agree," said Dr Kevin Tan, former president of the heritage society. "Already many residents are unhappy with people coming in and gawking at them and their homes or simply lining up to buy baguettes and leave," he added, referring to the hip bakeries and cafes that have sprung up.

The Bukit Brown cemetery, which was not on anyone's radar when the 2010 study was done, is now being held up for its rich biodiversity, being a testimony to a cultural tradition, and bearing unique and outstanding artistry on the tombs' architecture. More importantly, it tells the story of Singapore's migrant history, integral to the country's development.

An early 1917 cemetery, Skogskyrkogarden in Sweden, is on the Unesco list.

While the Government has said it currently has no plans to submit other sites for tentative Unesco listing, heritage groups hope the first step for the Botanic Gardens will lay the foundation for Singaporeans to discuss what they value and want to protect, and how that squares with the national agenda.

Dr Chua believes the focus should not be on whether each site meets the Unesco criteria of having outstanding universal value.

"It's not a list of checked boxes, but a spark to kick off a conversation about what is meaningful to us," she said. 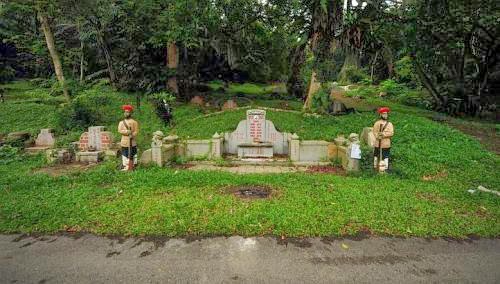