Elegy for an urban graveyard

AT QING MING, the annual two-week-long tomb-sweeping festival that culminates this year on April 4th, Bukit Brown springs to life. The biggest Chinese graveyard outside China (http://bukitbrown.com/main/) , its expanse of lush greenery in the heart of Singapore is for much of the year the peaceful haunt of joggers, birdwatchers, cyclists, strollers and the descendants of those buried there. At Qing Ming, this last group expands. The cemetery becomes crowded with clusters of the filial, visiting their ancestors’ graves. They come because they do so every Qing Ming. But this year, their visits have a greater significance: Bukit Brown is in danger, and has become embroiled in a debate over what sort of country Singapore wants to be.


They sweep their ancestors’s graves clean and slash back the foliage with which the jungle tries to reclaim untended tombs. They scrub the headstones and sometimes repaint the epitaphs. They burn joss and candles and strew coloured paper. They make bonfires of paper ghost-money and of gifts for the afterworld. One lucky grandmother this year got a new handbag, a pair of shoes and frock. A great-grandfather, dead these past 80 years, scored an iPhone5 (in replica but, one assumes, preloaded with all the apps a contemporary ghost might need). They leave offerings of fruit, cakes, tea and, sometimes, duck, fish, pork or cockles (to be consumed by the living, with the shells scattered about to symbolise money).


Little old ladies have to be carried up the muddy paths between the graves. Some families are in a rush, with other ancestors in other cemeteries to visit later on. Some make a day of it, taking time to fold the ghost money, and staying for a picnic of the foodstuffs the dead will not, after all, enjoy by themselves. Tai Liu Sai’s elderly great-grandson, who has rescued his grave even while a number of its neighbours have been subsumed by the undergrowth, does so because “I promised my granny.” When he is gone, his own daughter may not come; he does not want to burden her with the responsibility. Just down the hill is the grave of Lee Hoon Leong (http://publichouse.sg/categories/people/item/196-lee-hoon-leong-grandfather-of-lee-kuan-yew) , a grandfather of Singapore’s founding prime minister, and great-grandfather of the incumbent. As of the morning of March 30th, it had not been swept during this Qing Ming.

This year the rituals have been tinged with a new source of melancholy. By the next grave-cleaning festival, Bukit Brown may have been transformed beyond any recognition, as work starts on the eight-lane expressway the government plans to carve through it. The sunnily inclined will point out that of over 200,000 graves now estimated to be in Bukit Brown and adjacent graveyards, only 3,746 will have to be exhumed to make way for the road. And in a gesture to the nature-lovers who have argued Bukit Brown is an invaluable haven for birds and animals, it is to be built as a flyover, so as not to impede their movement. But no one can doubt that the character of the place will change for ever, from as soon as construction begins.

The government is showing consideration for the people directly affected as well as for the fauna. Descendants of those in the graves that lie in the way of the road have until April 15th to register for exhumation, and until May 31st to arrange for their disinterment. The government has commissioned a team to document all that is known about the graves to be dug up. That task completed, it is also preparing an oral history of the nearby village of grave-tenders, headstone carvers, fruit-sellers and golf caddies (the posh Island Country Club is just across the road), which was cleared a generation ago. After the deadline, the government will, at the taxpayer's expense, arrange exhumations and cremations, and store the ashes for three years in a columbarium. Remains still unclaimed will then be dispersed at sea.

One tomb to be opened is occupied by a man who was tortured by the Japanese during their occupation of Singapore from 1942-45. His great-grandson says he died from being forced to drink unset cement. The authorities keep nagging the great-grandson to get on with exhumation. But he is biding his time, noting that very few others are doing anything. In fact, no more than about a third of the 3,746 graves to be disturbed have been registered. Only some 200-odd families have arranged private exhumations. When you are dead, passive resistance is the only form of protest left. But it can be quite effective.

Bukit Brown has become a focus for active protest, too. Here I should declare an interest: the protesters have my sympathy. Banyan, his family and their dog all love the place. They like its beauty, its trees (including some favourite specimens of my arboreal namesake), its birds and monkeys and the inexhaustible discoveries the tombstones offer. And we like the people who frequent Bukit Brown, including the diffuse but devoted band of activists who are dedicated to trying, almost certainly forlornly, to save it from the developers.

Naturally, I like to think that mine is more than a selfish sense of outrage. Bukit Brown is an important part of Singapore’s “heritage”. That should give it a certain protection, these days. Liew Kai Khiun, a local academic, noted in a post on a Malaysian blog (http://www.themalaysianinsider.com/sideviews/article/untidy-memories-for-a-loveable-singapore-liew-kai-khiun)  how in the 1960s a government minister had dismissed objections to the clearance of another graveyard by asking “Do you want me to look after our dead grandparents, or do you want to look after your grandchildren?”

These days, Mr Liew reckons, the government feels that it has to tread more delicately. It has just announced free entry for Singaporeans from May 18th to all national museums; and the government is to pump more money (http://www.asiaone.com/News/Latest%2BNews/Singapore/Story/A1Story20130308-407318.html)  into television programmes exploring Singapore’s history. An explicit model is this year’s “History from the Hills (http://video.xin.msn.com/browse/tv/show?tag=history+from+the+hill) ”, which used Bukit Brown to tell Singapore’s story.

The rekindled interest in heritage is part of a broader conversation about what it means to be Singaporean, which in turn is bound up with the biggest political issues: population and immigration. Already, probably more than half of Singapore’s people were born elsewhere. Singaporeans are having very few children—their women’s average fertility rate is among the lowest in the world.

The government argues that, if living standards are to go on rising, the population has to grow. In January a government white paper on the population (http://www.nptd.gov.sg/content/NPTD/news/_jcr_content/par_content/download_98/file.res/population-white-paper.pdf)  projected that it would increase from 5.3m now to 6m by 2020 and to 6.5m-6.9m by 2030. But this angered many of the less well-off Singaporeans, whose main daily grouses are the unaffordability of housing and the difficulty of getting onto the underground at rush hour. Many blame both problems, as well as their low wages, in part on an influx of foreigners.

So the government also talks of the importance of keeping a “Singaporean core”. For the ethnic-Chinese that make up three-quarters of that core, Bukit Brown—until it closed in 1973, the only municipal pan-Chinese cemetery, as opposed to those dedicated to different clans or dialect groups—is a central part of their heritage.

It is also the scene of an important battle in the fall of Singapore in February 1942. Jon Cooper, a British battlefield historian, paints a vivid picture (http://bukitbrown.com/main/?p=219)  of the horrors of that struggle, as young British soldiers from the 4th Suffolk regiment, newly arrived in Singapore after the long sea voyage, took shelter from an artillery barrage in the tombs of Bukit Brown, and fled through its tangled undergrowth and scattered structures as the Japanese advanced with naked bayonets and swords, and screams of “Banzai!”. Some were never seen again.

The expressway through Bukit Brown seems of questionable utility. The government has said it is needed to combat congestion on nearby roads, where, according to its forecasts, the volume of traffic will be 20% greater by 2020. Activists argue, first, that it would be better to find ways to curb car use, and, second, that the true point of the road is as the first step in a bigger plan. The whole area was designated for residential use as long ago as 1991.

This is what Singapore’s government has always done: look around corners on behalf of its people and then plan ahead, confident enough in its own infallibility and in the inevitability of its re-election to ignore pressure groups and resist pandering to populism. Even its critics concede it has been very successful. But times have changed. Social media have turned isolated, silent dissent into more concerted, vocal protest. In response, the government makes much these days of its willingness to “listen” and consult. The political opposition—with fewer than 10% of the seats in parliament—seems a long way from power. But it can no longer be dismissed as an irrelevance, and for now at least, the political momentum (http://www.economist.com/news/asia/21571159-despite-national-conversation-many-singaporeans-feel-government-does-not-listen-limits)  is with it.

In this context, the struggle over Bukit Brown takes on a wider meaning. Among the improbable coalition of birdwatchers, conservationists and heritage buffs trying to stop the road are a few who see a broader political goal: of testing the government’s promises of a new responsiveness. In that sense, as in many, the argument over the fate of the graveyard may look like a tussle over Singapore’s past. But it is really about its future. 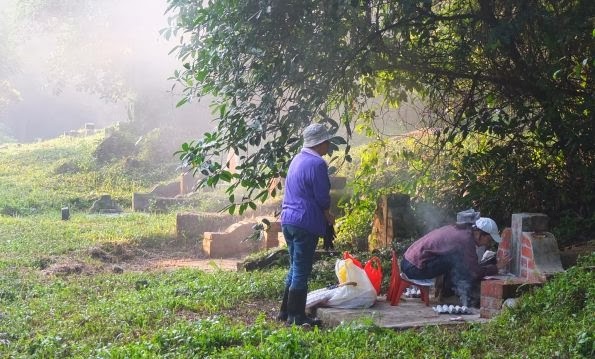