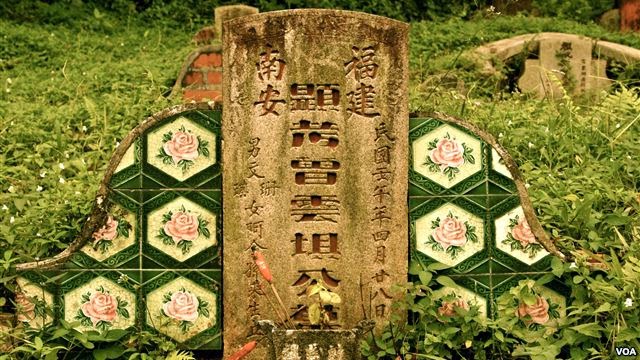 The ornate tile detail on one of the many overgrown graves at Singapore's Bukit Brown Cemetery. (VOA/K. Lamb)

The ultra-modern city state Singapore has become a model that other Asian nations aspire to - organized, immaculate and efficient - but at what cost? Some residents say that plans to plow through one the country’s most important heritage sites show that Singapore’s rapid urbanization has reached a crucial tipping point.

The sprawling overgrown rainforest of Bukit Brown is less than a 10-minute cab ride from the heart of Singapore.

A haven for nature lovers and joggers, the lush 23 hectares is also a cultural treasure.

Dotted amongst the large moss-covered banyan trees and ferns are some 100,000 traditional Chinese graves dating back to the 1800s.

The ornate tombstones of many famous Singaporeans, some who are now immortalized in the city’s street names, reside at Bukit Brown Cemetery. But they might not rest in peace for too much longer.

The Singaporean government recently announced plans to build an eight-lane highway through the ancient graveyard.

Some 4,000 graves will be exhumed, including that of Ong Hui Lin’s great grandmother. “It’s a tragedy that is no longer mine, but maybe the nation's. Lost families, you know and lost heritage. The idea of family, family unity, ancestors and descendants, these ideas are very important,” said Ong.

Ong, 56, is a fourth generation Singaporean who has visited the graves of her ancestors at Bukit Brown for as long as she can remember. The retired schoolteacher says the plan will destroy an important symbol of Singaporean history and culture.

“In Bukit Brown, every grave and every cluster of grave tells the family history. It is just something that is unique. People say that dead men can’t tell stories, but these do because the stories are standing there and staring at you," Ong stated. "And it’s beautiful, it’s not something ugly, it’s beautiful and it’s just so sad that it’s got to go.”

​​​​Several groups are campaigning to save Bukit Brown, believed to be the largest Chinese cemetery outside of China.

In a country where political protest is a rarity, supporters of Bukit Brown are quite vocal.

Groups such as the Singapore Heritage Society say there are alternatives for the proposed road, which is expected to support new housing developments.

Tay Kheng Soon is the former president of the Singapore Institute of Architects who says the idea that land is scarce in the city state is pure fiction. “It is a useful fiction because it increases land prices," he said. "Because of the presumed scarcity therefore the price goes up. That’s the way in which the state generates high land values in order to cream off for the state’s coffers.”

Tay says the state getting rich is not necessarily a bad thing. But he argues that the rapid urbanization of Singapore is reaching a crucial tipping point, on the verge of becoming an ultra modern state with no soul.

“I think that increasingly, Singaporeans - and I think decision makers - are becoming more aware that the soft aspect of Singapore is important, identity is important, but it has yet to be translated into monetizable values. So Singapore has reached this moment in history where it is beginning to realize that there’s something that’s missing,” Tay noted.

As the country rapidly modernizes, and more and more foreigners become permanent residents, Bukit Brown is a reminder of a Singapore that was.

Sociologist Terence Heng says the cemetery is a kind of material anchor for the Chinese diaspora. “It’s a reminder of who we were and the fact that it has now been overgrown because it was closed in the 1970s, it is a bit of a parable of what we could become if we chose certain paths in life,” he added.

The government says it considered alternative routes for the new road, but none was found.  The plan to cut through Bukit Brown, it says, will have the least impact.

Accompanied by traditional ceremony, some graves have already been exhumed and moved to a nearby columbarium.

Construction of the highway is expected to begin early this year.