Many yet to claim graves at Bukit Brown

Many yet to claim graves at Bukit Brown 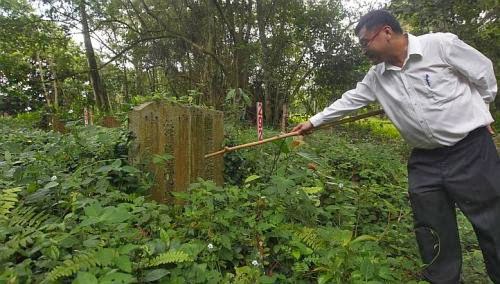 
STUDENT Toh Zheng Han and his family will be conducting Qing Ming Festival rituals at the Bukit Brown cemetery this year for the first - and last - time.

His maternal great-great-grandaunt's grave is among 3,746 that will be exhumed to make way for a new road.

The 25-year-old's family claimed the grave last September after finding the burial record in a family genealogy book.

But some two-thirds of the graves affected by the new dual four-lane road, meant to ease peak-hour congestion in Lornie Road and the Pan-Island Expressway, remain unclaimed.

Heritage buff and cemetery guide Raymond Goh said the unclaimed graves may be Qing-dynasty ones moved from other parts of the country or those belonging to Hokkiens and Straits Chinese.

Other dialect groups such as the Cantonese and Teochews had other cemeteries in the past so fewer of them are likely to be buried at Bukit Brown, added Mr Goh, who has been helping descendants locate graves.

The Land Transport Authority (LTA) has said the deadline for relatives to claim graves has been extended till after the Qing Ming period in late March and early April. Exhumation will begin after that.

The LTA will pay for the cost of exhumation, the cremation of remains and the storage of ashes in a government crematorium and columbarium. Ashes from unclaimed graves will be scattered at sea after three years.

The LTA's tender to build the new road closed last October and has not yet been awarded.

Meanwhile, documentation work on the affected graves is almost complete, though the data has not yet been analysed, said Dr Hui Yew-Foong of the Institute of Southeast Asian Studies, who is leading the process.

It was commissioned by the authorities after heritage groups spoke of the need to commemorate the history of the place.

Dr Hui said the deadline extension may help those who, for one reason or other, have not made claims.

"Sometimes, claimants may not have come forward because they think other relatives may be claiming. The extension also gives families more time for closure," he added.

But Mr Goh pointed out that some may not even know they have relatives buried in Bukit Brown.

Polytechnic administrator Gan Su-Lin, 46, realised she had kinfolk buried there only after she checked the LTA's burial register.

Her family had the remains of her grand-uncle and his wife - who she thought were buried in Malaysia - exhumed privately in October.

"I'm vexed that we rushed his disinterment, believing that the public exhumations would begin before Qing Ming 2013," Dr Gan said.

"Many of us who arranged for private exhumations did so because we wanted to do right by our ancestors and ensure they were resettled properly and with dignity."

To view the Bukit Brown burial register and find out details on how to go about claiming graves, visit http://app.lta.gov.sg/exhumation.asp.