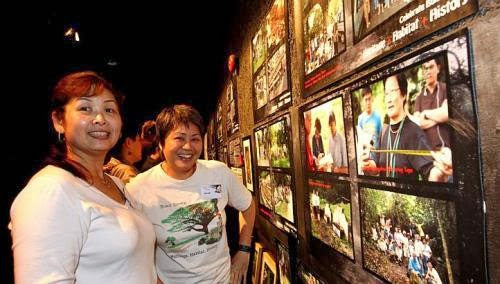 Ms Serene Tan (left), 48, and Ms Millie Phuah, 52, who both have great-grandparents buried at Bukit Brown, lending their support to the Celebrating Bukit Brown event yesterday at The Substation. The day-long event featured a host of activities from exhibits and readings to a documentary screening. -- ST PHOTO: CHEW SENG KIM


BUKIT Brown cemetery hogged the limelight yesterday at The Substation's Black Box Theatre, when up to 400 people gathered to celebrate its heritage.

Organised by the Singapore Heritage Society (SHS) and the group All Things Bukit Brown (ATBB), the day-long event featured a host of activities from exhibits and readings to a documentary screening.

The cemetery had made headlines in recent years when it was announced that parts of it would have to make way for new roads. Of the 100,000 or so tombs there, 3,746 must be exhumed.

"We want to inspire people to go to the site before it changes too much," said Dr Chua Ai Lin, vice-president of the SHS.

More than 4,000 people have participated in 190 tours - organised by the ATBB, SHS and Nature Society - to date.

Said an ATBB volunteer, production manager Khoo Ee Hoon, 47: "There's a lot of excitement. We can go in, 'bush bash' and find tombs. There are many yet to be discovered."

Her area of interest is genealogy and trying to determine which tombs are linked to people who are related.

Descendants of those buried at Bukit Brown also lent their support yesterday. Ms Millie Phuah, 52, read from Kuo Pao Kun's play The Coffin is Too Big for the Hole. "It's a real sense of identity," said the video producer about finding her great-grandfather and two great-grandmothers' plots at the cemetery in 2011. "It's like you know who you are, with family history set in stone."

The event also included an update on the Bukit Brown documentation project by Dr Hui Yew Foong, 40, a senior fellow and anthropologist at the Institute of Southeast Asian Studies.

Explaining that the project is a "holistic" one, he spoke about the rituals and social history of the cemetery. Some 4,000 graves, including previously exhumed ones, have been documented as part of the project.

The crowd also caught the first public screening of a 45-minute documentary, Bukit Brown Voices, by Khoo Su Mae and Brian McDairmant. It follows the families who come each year to pay respects to their ancestors, as well as those who exhume the graves.