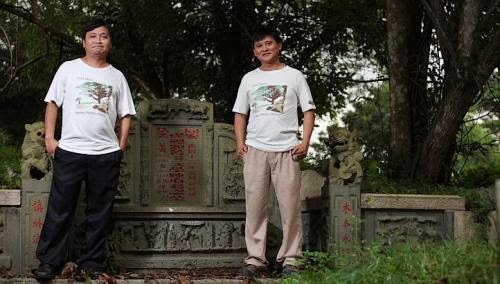 The Goh brothers Raymond (left) and Charles, at the grave of one of the cousins of Singapore pioneer Tan Kah Kee. They explained that the five-colour flag at the top of this tombstone was the first flag of the Chinese Republic, which was used from about 1912. -- PHOTOS: SAM CHIN FOR THE STRAITS TIMES, NEO XIAOBIN


Visiting cemeteries and uncovering the secrets of forgotten tombs may seem an unconventional, if not morbid, activity but for brothers Raymond and Charles Goh, it is their passion.

The duo have day jobs but their hobby is finding tombs and they are experts at it.

Their discoveries include the lost tombs of nearly 100 notable Singaporeans such as Tan Keong Saik, after whom Keong Saik Street in Chinatown is named, and Cheang Hong Lim, of Hong Lim Park fame.

Just last week, the brothers were in the news again for unearthing the tomb of Teochew pioneer Seah Eu Chin, also known as the King of Gambier, on a hill known as Grave Hill in Toa Payoh West, adjacent to Bukit Brown cemetery.

They found the grave after a year-long search.

Mr Charles Goh, 44, a construction safety manager who is married with no children, says: "People like golfing, swimming, canoeing. We like discovering our own history."

Elder brother Raymond Goh, 48, says he became interested in tombs after he visited his grandfather's grave in Chua Chu Kang in 2006 for the first time. He had asked his father to take him there as he was interested in finding out more about his ancestors.

The brothers have three other siblings, none of whom are interested in hunting down lost tombs. Their late father was a taxi driver and their mother, who is 71, is a housewife.

Mr Raymond Goh says he felt a connection when he saw his own name on his grandfather's tombstone.

This is the oldest tomb in his family that he knows off. He says his great grandparents were buried in Jurong but their graves have already been exhumed.

He was so moved by seeing his grandfather's tombstone that he wanted others to feel this connection too. The father of three says he knew that Bukit Brown cemetery had old tombs and felt "maybe I can also help others find their roots".

So he started combing the abandoned Bukit Brown cemetery, located between Lornie Road and Mount Pleasant Road, which was in use from January 1922 till about 1973.

Mr Raymond Goh, a trained pharmacist who is a director at a multinational company, says he had been volunteering at a temple since he was 19 years old and had always been interested in Buddhism and Taoism. That led him to find out more about Chinese history and culture.

To him, tombstones hold many cultural and historical references besides indicating who is buried there.

The National University of Singapore alumnus says decorative carvings sometimes tell stories from Chinese classics such as Romance Of The Three Kingdoms. And historical references such as the first flag of the Chinese Republic or a Chinese emperor's name can help to date the tomb.

Old tombstones often do not even have the names of the individual, only the posthumous name or the names of their children, so the brothers have to match dates and family trees to crack the code.

And this is right up Mr Charles Goh's alley.

He founded a group called Asia Paranormal Investigators in 2005 and its interest lies in debunking urban legends such as ghost sightings and alien abductions in Singapore, as well as sightings of Big Foot in Malaysia.

But searching for lost tombs is where the interests of both brothers merge.

When they first started looking for tombs of Singapore pioneers, they were not systematic.

Mr Raymond Goh says: "We had no map. We would blindly, randomly walk along the hills and just explore."

With just a stick, a towel and a camera in hand, they would trudge through the undergrowth, clear the plants and vines and take photos of any tombs of interest in Bukit Brown cemetery.

Each trip took about two hours and resulted in numerous cuts from vines and thorns and bites from countless insects and mosquitoes. Mr Raymond Goh rolled up his pants to show the bites on his legs.

After identifying whose tomb it is, the brothers check the date of burial and name against the burial registry, which states which section of the cemetery the individual is buried.

They had been trying to map out the sections until they got their hands on a map from the National Environment Agency last year, which already had the sections mapped out.

Now the brothers claim that as long as they have the name of the person and the date of death, they have a 100 per cent success rate of finding a tomb in the Bukit Brown cemetery.

It takes them about three days to locate a tomb among the 100,000 there.

In the Hokkien cemetery and the Ong Clan cemetery around Bukit Brown, their success rate drops to 10 to 20 per cent because they do not have the burial registry or a map of the sections.

In 2007, the brothers publicised their first major discovery - the tomb of Cheang Hong Lim's tomb at Bukit Brown cemetery.

Mr Raymond Goh says: "We were just exploring the hills and I noticed a high- ranking title. Then I saw the children's names."

Cheang Hong Lim's name was not on the tomb, but checks against the burial directory showed it was indeed his tomb.

Sometimes, the brothers get requests from descendants who are keen on finding the tombs of their ancestors.

Mr Raymond Goh goes through land deeds, the National Archives and old articles from the National Library to find out where the individual might be buried.

His brother looks at old maps dating back to the 1920s to figure out which part of that person's land or which part of a cemetery the tomb might be in.

Once they have found the area, it usually takes them two to three hours of battling with the humidity, undergrowth and mosquitoes before they hit the jackpot.

On other occasions, the brothers will just go on their regular bi-monthly "research" trips, hoping to spot one of the tombs that they have been asked to find.

These days, they receive two to three requests a week from descendants looking for the tombs of their lost relatives.

Even the National Archives and the Land Transport Authority, they say, have given their contact details to people who are searching for the graves of their ancestors.

The brothers, who are certified tour guides, also take Friends of the Museum and school groups as well as companies on specialised Bukit Brown tours.

The group size is around 30 people.

After setting up a Facebook group - Heritage Singapore Bukit Brown cemetery - last year, they have attracted more people to sign up for their free weekly public tours.

These tours are run by the brothers and a group of about 50 enthusiasts.

The Facebook group has more than 2,000 members. "Interest is growing but time is running out," says Mr Raymond Goh.

Last year, plans to build a highway cutting through Bukit Brown cemetery were announced. The road would affect about 5 per cent of the graves.

"We are trying to educate the public to show that there is history and heritage there that the Government may not know about," he adds.

As urbanisation continues to erase traces of the past, the brothers continue to help others find their roots.

Mr Raymond Goh says: "Many people are very emotional when they re-connect. They find their ancestors and their roots, and it helps ground them to Singapore."

When young people see the tombs and hear the history behind them, he hopes they - like him - will become more attached to Singapore.

"This is my country, it's worth fighting for because my ancestors are here." 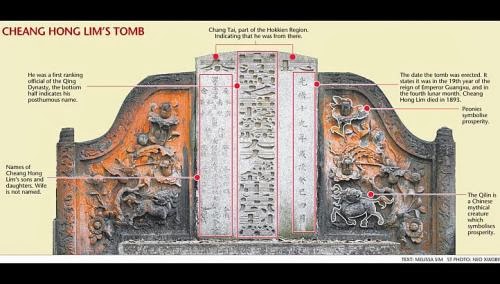