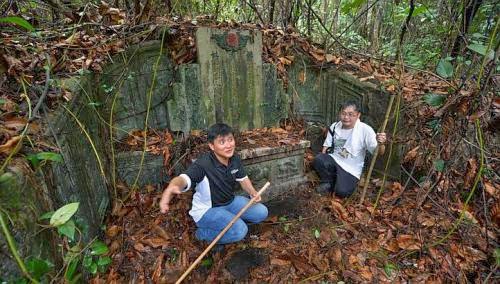 They found the grave last week after a year-long search.

Seah was born in 1805 in Yupu village, Chaozhou province, and came to Singapore in 1823. He built his fortune as the owner of gambier plantations in areas such as Thomson and came to be known as the King of Gambier. He was an early member of the Singapore Chamber of Commerce, and founded early Teochew clan association Ngee Ann Kongsi in 1845 with a group of Teochew merchants. He died in 1883.

His son, Seah Liang Seah, was also a prominent member of society. He was municipal commissioner and ran his father's businesses, which included spice trading. Liang Seah Street was named after him.

Seah Eu Chin's grave is the latest among those of Singapore pioneers to have been discovered recently. The tomb of landowner Chia Ann Siang, after whom Ann Siang Hill is named, was discovered in September this year. The tombs of Tan Keong Saik, whom Keong Saik Street in Chinatown is named after, and Tan Eng Neo, whom Eng Neo Avenue is named after, were discovered last year at Bukit Brown Cemetery off Lornie Road. The Goh brothers, who have been exploring tombs since 2006, were also involved in those discoveries.

On how the search began for Seah's grave, Raymond, 48, a licensed specialist tourist guide with the Singapore Tourism Board, said: "Last November, a classmate of mine read about our discoveries of pioneers buried at Bukit Brown, and e-mailed me to ask if I knew where Seah Eu Chin was buried and if I could take some of the Seah descendants to visit the tomb."

He began his search that very month at Bukit Brown by finding out if any of Seah's family members were buried there.

"The breakthrough came when I found the grave of Mrs Seah Eng Kun, who died in 1929, at Bukit Brown. Her husband Seah Eng Kun was the son of Cheo Seah, the eldest son of Seah Eu Chin. From the tombstone, I could determine the generation name used for the Seah family, and in turn, learn Seah Eu Chin's generation name," he said.

He was referring to the Chinese practice whereby family members of the same generation use the same characters in their names. Knowing the generation name, which was certified in an imperial edict he found, helped him confirm that the grave he found on Grave Hill belonged to Seah Eu Chin.

Raymond and Charles, 44, later found a Straits Times obituary that described Seah Eu Chin's funeral procession, from his home in North Boat Quay to his plantation in Thomson Road, about 4.8km away from town.

That is where Grave Hill is, according to a 1924 map, said Raymond, and that is where they found the grave. They identified it by his generation name She Bang Cong (his name in Mandarin), his birthplace, the names of his two wives who were buried next to him, and other inscriptions on the tomb. It was previously reported in The Straits Times in 2009 that Seah Eu Chin's grave was found in Kwong Hou Sua Teochew Cemetery, but Raymond believes that belonged to a Seah descendant.

Seah Eu Chin's grave is about a 10-minute walk up the hill, and is covered with overgrown grass and shrubs. The brothers have cleared a path leading up to the grave.

Said Dr Hui Yew-Foong, 40, an anthropologist at the Institute of Southeast Asian Studies and the appointed documentarian of Bukit Brown Cemetery: "This grave is of the same level of historical significance as the graves of Tan Tock Seng and Tan Kim Ching, and therefore serves as an invaluable part of Singapore's heritage."

He said Grave Hill will not be affected by the Land Transport Authority plans to build a four- lane dual carriageway through Bukit Brown Cemetery to alleviate peak hour congestion on Lornie Road.

However, the Goh brothers are concerned, as the hill is close to the upcoming $8billion North- South Expressway.

Said Charles, who also is a licensed specialist tourist guide: "If this hill is redeveloped like Bukit Brown, it will mean the change of Singapore's heritage landscape, which can be told through the tombs of people such as Seah Eu Chin."

Mr Jeffrey Seah, 55, a direct descendant of Seah Eu Chin,learnt about the discovery from his first cousin's wife in Australia, who is in touch with the Gohs.

Seah Eu Chin is his greatgreat-great-grandfather.

The director of the Security Industry Institute said: "Very few people know about them, and parts of our history don't go back to the early founders - the people who laid the foundation for Singapore, prior to Lim Yew Hock's and David Marshall's time. They should do something to conserve the site, it's a rare discovery." 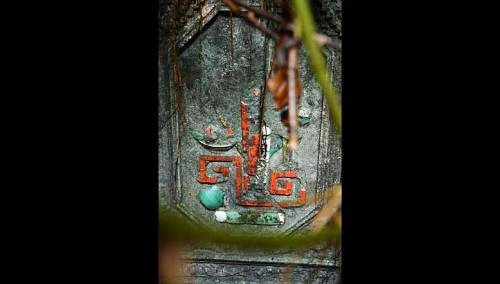 A panel from the tombstone. -- ST PHOTOS: KUA CHEE SIONG