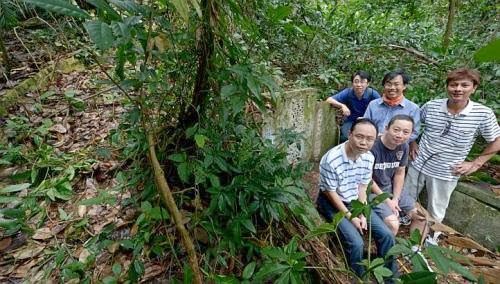 
A quest by finance manager Anthony Sng to unravel his family's ancestry culminated last week in the discovery of his great-great-grandfather Chia Ann Siang's tomb.

The final resting place of the wealthy land owner, after whom Ann Siang Hill in Chinatown is named, had been a mystery until now.

Yesterday, five of his descendants went into the forested area across from St Joseph's Institution to view the tomb for the first time and pay their respects. They made it just in time for the 120th anniversary of his death today.

It began with a conversation between Mr Sng, 50, and his mother, Madam Dorothy Chia, 81, in May. She told him their family had a very important relative buried in the Bukit Brown cemetery, but she could not recall who.

All she remembered was that her own mother used to take her there to pay their respects at a grave before World War II.

News that several thousand graves would make way for a road project cutting through Bukit Brown made her concerned about finding this lost relative.

That prompted Mr Sng to start piecing together a family tree of immediate and distant relatives.

He said: "For years, I've wanted to do a family tree to find out who my ancestors were. We needed to find out fast before exhumation took place, to have a last chance to pay our respects. The fact that it was someone important made it more urgent and interesting."

A cousin told his brother, shipping director Alphonsus, 46, that their family was related to Chia Ann Siang - and that they were his great-great-grandsons.

That sent Mr Sng trawling the Internet for more information about his ancestor. He also approached the National Archives of Singapore and combed through old newspapers to piece together he family tree.

He established the generations of family members that came after Ann Siang, and it was like putting a jigsaw puzzle together, he said.

His research also helped him connect with distant relatives such as his cousin Alvin Lee, 50, a pastor based in Perth. Mr Lee is descended from Ann Siang's fourth son, while Mr Sng's roots go back to the third son.

Mr Sng said that in a family tree, several bits of information are needed to complete an entry - a person's full name, date of birth and, if they are dead, their date of death and burial place.

In a book titled One Hundred Years' History Of The Chinese In Singapore, he discovered that Ann Siang was buried in his own private burial ground adjoining the Hokkien cemetery in Bukit Timah Road.

With that clue, he began searching for information about the grave, but made no headway.

While sifting through an online newspaper archive, he found a 1977 notice which said the Public Works Department would exhume four graves belonging to the estate of Ann Siang.

"I thought his grave had been exhumed," Mr Sng said. But when he contacted several columbariums, none had records of Ann Siang's ashes being placed there.

Next, he wrote to the Ministry of National Development and was referred to the National Heritage Board. Early this month, the board told him that the private cemetery might be located within the perimeter of the Hokkien Huay Kuan burial ground near Whitley Road and Mount Pleasant.

With his brother Alphonsus, Mr Sng went to the cemetery the very next day, Sept 8, expecting to find four unexhumed graves.

"We got the shock of our lives when we saw at least 10,000 graves in that forested area. Some were located on the slopes, so we had to slide down to inspect them," he said.

They gave up looking after two hours.

While Mr Sng was having little success in his search, another group of friends was actively assisting with the search for his ancestor's tomb.

His cousin, the pastor Mr Lee, had approached cemetery guide Raymond Goh, 48, to help find the tomb. The pair had become acquainted during a heritage tour of Bukit Brown earlier this year.

Mr Goh, who began exploring the Bukit Brown burial grounds in 2006 out of an interest in Singapore history, has connected many families with graves of lost relatives.

He had already found the graves of two of Ann Siang's sons in Bukit Brown - eldest son Keng Beng and fourth son Keng Sian. Mr Goh and his brother Charles then pored over exhumation records, land notices and old maps to narrow the search.

The 1977 exhumation notice stated that the four graves were located on "Lot 93 -19 Mukim XVII".

After cross-referencing old maps, Mr Goh realised the land lot was located at the tennis courts of St Joseph's Institution. But when he checked another old map, he found a small square-shaped burial plot marked out in what is now a forested area across Malcolm Road from the school.

On Tuesday, the Goh brothers went into the forest and within an hour located a large grave.

The names of Ann Siang's four sons, three daughters and two grandsons were engraved on the tomb, which was erected in 1892 - the year he died. Other engravings stated that Ann Siang was a fifth-rank official of the Qing Dynasty.

The tomb explorers had found their man, some 12 weeks after Mr Sng first began searching.

Said Mr Goh: "I was shocked. I didn't expect to find anything. Even at the grave, I didn't see Ann Siang's name initially... He had his posthumous name inscribed."

Posthumous names were typically given to prominent people after their death, and have positive values ascribed to them.

The Goh brothers relayed the good news to Mr Sng, who informed his relatives.

Yesterday, five of Ann Siang's great-great-grandsons trekked through the forest to pay their respects at his grave, a day before the 120th anniversary of his death today.

Also with them were the Goh brothers and several other Bukit Brown enthusiasts.

Standing in front of the grave, Mr Sng said: "Just imagine, 120 years ago the children of Ann Siang were standing here. Today, we are here. It's a great honour."

At the start, he knew only 62 family members, from his grandfather's line. To date, he has found another 109 members in his family tree.

Said Mr Alphonsus Sng: "I hope this inspires other families to trace their own family heritage, and know the experiences and challenges their ancestors faced."

Three other graves have yet to be found within the private burial ground. They are thought to be the tombs of their ancestor's wife, his second son and his eldest daughter.

Mr Sng said he and his relatives will discuss what comes next, now that the tomb has been found.

The family has already engaged a tomb keeper to clean the graves of Ann Siang's two sons in Bukit Brown, and is likely to do the same here.

Said Mr Sng: "The general consensus is that the grave needs to be cleaned up, and maybe build an access route so other members can visit in the future." 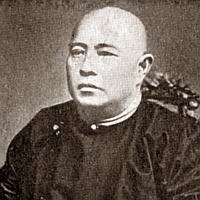 Chia Ann Siang was a wealthy Malacca-born Hokkien sawmiller who became one of the leading merchants of his time.

There are two different records of his age. One states that he was born in 1834 and died at age 58, while a book by Song Ong Siang says Ann Siang was born in 1832.

He was one of merchant Chia Poh Eng's many sons.

At the age of 16, he joined British firm Boustead and Company, which traded in commodities such as natural resources, spices and silk.

After eight years on the job, he was promoted to chief produce storekeeper.

While at Boustead, he became a partner of the firm Geok Teat and Company in 1863. He retired in 1890 after 42 years in the company, during which he built up a fortune. He then went into the timber business.

At his death in 1892, Ann Siang was a wealthy man and a landowner on a large scale.

His legacy lives on at Ann Siang Hill, which has restored shophouses today.

The hill was originally named Scott's Hill after its owner Charles Scott, and then Gemmill's Hill when auctioneer John Gemmill took over the house.

When Ann Siang came along and bought part of the hill, it took on its present name, Ann Siang Hill.