1,005 graves in Bukit Brown have been claimed by relatives in the last four months, reported The Straits Times today. 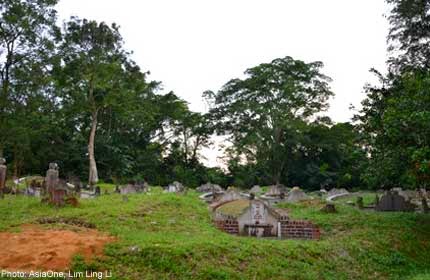 This works out to be about a quarter of the 3,746 graves that will be exhumed to make way for an expressway.

Relatives will have until Dec 31 this year to claim the graves.

Between March, when the government announced that it would proceed with the plans for the highway, and the start of this month, 178 of those who have claimed the graves have opted for a private exhumation, reported the paper. So far, 93 of these have already been exhumed.

Most will be exhumed by a contractor hired by the Land Transport Authority (LTA), to be paid for by the government.

Dr Hui Yew-Foong, an anthropologist at the Institute of Southeast Asian Studies, told ST that only about half of the graves are expected to be claimed, because of the cemetery's age of about 90 years.

Unclaimed remains will be cremated, with the ashes to be kept by the Government for three years, after which, the ashes will be scattered at sea.