June 23, 2012
There is a Chinese saying 富不过三代 – that is riches or legacy does not pass 3 generations.
What it implies is that if the descendants does not treasure what the ancestors left behind,  usually the wealth will dissipate after a few generations.
It is also a reminder to the descendants to treasure, safeguard and if possible expand upon what the ancestors has left behind. Sometimes people will try to break
this saying by ensuring that fortune will pass down the generations, even pass the 3rd generation.
----
It was the year 1982.
An obituary notice was published in the Straits Times for a grand old lady who died at the age of 91.
Few people at that time knew this lady was tied to the tides and fortunes of a prestigious family going back all the way a hundred years ago....a Pineapple King
Tan Tye came from Hokkien Tong Ann. Born in 1839, he came to Nanyang Singapore in 1860 when he was just 21 years old and in Singapore, he managed  to start the timber business, in addition
he had big rubber and pineapple plantations.

Tan Tye – the pineapple king
Pineapple is a suitable cash crop to be grown along side rubber, as rubber trees take 5 years to mature, whereas pineapples only 2 years to bear fruits.
Most plantation owners would plant pineapples besides rubber, making Singapore one of the major exporters of canned pineapples in the world.  Many Singapore pioneers
like Tan Kee Peck (Tan Kah Kee's father), Lim Nee Soon and Tan Tye made their fortunes through the pineapples industry at that time.
More reading on pineapples : http://www.a2o.com.sg/a2o/public/html/etc/11_Pineapple.htm
In fact Tan Tye was so well known for his canned pineapples, that people called him the Pineapple King.
He owned land near Clarke Quay and has a pineapple canning factory there.  He also donated land there to the government to build warehouses, hence today, there is a street Tan Tye Place near Clarke Quay named after him.
One of his famous brand of canned pineapples was the Istana Brand, which he managed together with his sons Lian Swee, Lian Boh and Lian Chye

Tan Tye with 2 of his sons Lian Boh and Lian Chye (Photo credit: Pat Lin)
In 1878, he was one of the 4 assistant directors of the Tan Si Chong Su Tan Clan temple.  Towards the end of the 19th century, he also donated funds to the Qing Government and was awarded a 4th ranking official title. 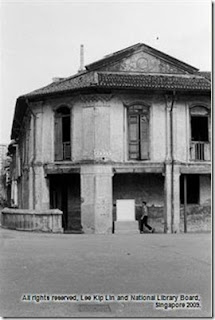 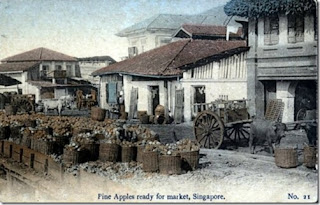 1900 – 1905 – pineapples in Boat Quay to be transported to canning factories
Pic source : a2o. com.sg
From ST : Tan Tye died in Singapore on Jul 22, 1898; his estate was a large one; the will was of somewhat complicated character, and he has, as so many gentlemen of Chinese race seem, particularly in the past, anxious to do tied up his property in such a way that the distribution is to be delayed until the last possible moment. He was twice married, and had children of both sexes by both wives; he also had a mistress by whom he had a child; and he also adopted certain sons; in addition to this he had brothers whose sons, his nephews, also benefitted under his will.
It was stated that the Tan Tye clogged the distribution of his property until the expiration of 21 years from the death of the survivor of such of his children and grandchildren and certain named nephews as should be living at testator's death.
The tomb of Tan Tye.  He was buried somewhere near Upper Pierce Reservoir 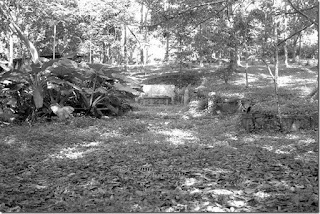 A close up of his tombstone reveals his 5 sons and 3 daughters. 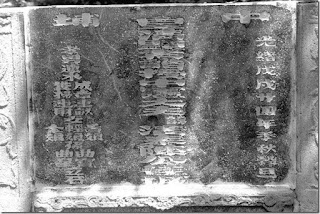 Tomb of Tan Tye showing his 4th rank Qing Dynasty title and his children
His blood sons included Lian Swee,  Lian Boh and Lian Chye.
However, sometime before 1970s, his tomb was raided by tomb raiders.  The descendants then decided
to shift his remains to a smaller tomb near by. 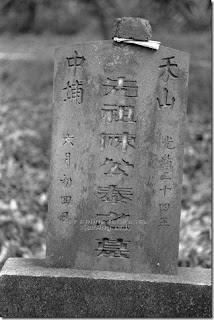 The smaller tomb whereby Tan Tye's actual remains were kept.
On 20 Nov 1918, the mother of Lian Boh and Lian Chye died and was buried at Hokkien Huay Kuan near Bukit Brown Cemetery
On 30 Nov 1965,  2 of his daughters' graves nearby was affected by redevelopment, and the tombs were exhumed
and reinterred at Hokkien Huay Kuan Cemetery as well 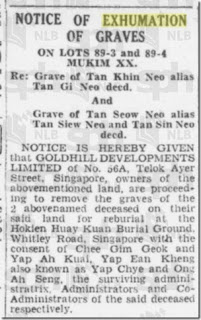 One of the daughter of Tan Khin Neo, Chee Gim Geok, together with other administrators of the deceased, gave consent for the exhumation.
Soon, it was Tan Tye's turn to be exhumed.
An exhumation notice was published in The Straits Times, 31 May 1993, Page 26
EXHUMATION NOTICE THE GRAVE OF "TAN TYE"
3 days later, Tan Tye's trustee British and Malaya Trust (BMT)  became aware of the exhumation notice of the exhumation and immediately commenced legal action to prevent the exhumation
The case went all the way to the Court of Appeal, presided by CJ Yong Pung How but BMT lost the case in 1999 and Tan Tye's tomb was exhumed. BMT has lost the grave land that they were entrusted
to keep by Tan Tye through an unfortunate string of events pertaining to sale and resale of the plot of land one part of which contained Tan Tye's grave.
Tan Tye grave was original situated in a lot of approx 4 acres of land and the surrounding land including this grave land in 1971 was to be sold and the grave land resold and conveyed back to
BMT.  The land was soon resold again and involved more parties including a bank and BMT, the trustee never got back the grave land.
----------------
Back to Tan Tye's will.  At the time of Tan Tye's death, there was a young girl who was his granddaughter named Chee Gim Geok.   She was the administrator who exhumed her mother grave
Tan Khin Neo in 1965.  She was the youngest grandchild of Tan Tye's will.
As Tan Tye has stated that his property can only be divided 21 years after the death of the last surviving grandchildren, so when Chee Gim Geok died in 1982,  Tan Tye's vast property
can only be divided in 2003.
And the property can only be divided among his male descendants, but not to adopted sons nor women folk.
More than 50 people laid claim to his property in 2003,  but in 2004 May 21, , the high court decided that only 16 of his descendants qualify,  these 16 have descended from his
3 blood sons.  At that time, his property was worth some $70 million, and each descendant could get around 4 million dollars.
Two of Tan Tye's sons Tan Lian Boh and Tan Lian Chye are currently buried at Bukit Brown Cemetery. 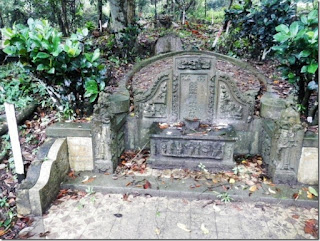 Tomb of Tan Lian Boh – LTA Stake No 1872.  Tan Lian Boh's tomb was exhumed recently in
preparation for LTA highway project cutting across Bukit Brown.
Tan Lian Boh is also the founder of Xiao Tao Yuan (Little Peach Garden), an entertainment club whereby intellectuals would gather and discuss about political and other issues.
According to a local researcher Walter Lim (http://bukitbrowntomb.blogspot.sg/),
Tan Lian Chye and Teo Eng Hock once wrote to the British Consul in Shanghai to help rescue Zhang Tai Yan (http://en.wikipedia.org/wiki/Zhang_Binglin)
and Zou Rong (http://en.wikipedia.org/wiki/Zou_Rong) in the 1903 Subao case which shocked the world, writing under the auspices of this club Xiao Tao Yuan.
The Subao case marks the moment in Chinese history when the radicals who called for the end of dynastic governance and the creation of a democracy split
from the reformers who sought creation of a constitutional monarchy and was also a turning point in China's constitutional order, helping to publicize and popularize the cause of constitutional change
Reference : http://papers.ssrn.com/sol3/papers.cfm?abstract_id=1825954
As for Tan Lian Chye (also known as Tan Chor Nam),  his tomb still remains at Bukit Brown. 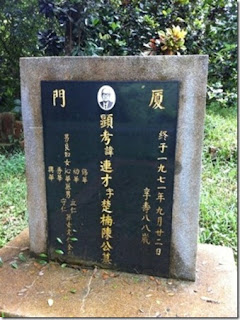 Tan Lian Chye was one of the pioneers of the local branch of Tong Meng Hui, which helped Sun Yat Sen to overthrow the Qing Government 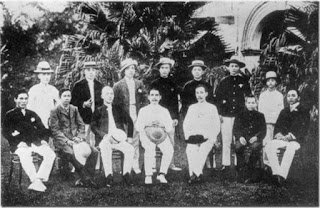 Pic of Tan Lian Chye sitting next to Sun Yat Sen
Tan Lian Chye, his mother and his two sisters' tomb nearby may be affected by later development slated for Bukit Brown and its surrounding area.
Tan Tye has a vision, to let his legacy survive beyond 3 generations so much so that he left an unusual will.
The tombs of Bukit Brown tell the story of many Singaporeans who helped to build up Singapore and some even play great roles beyond the little red dot of Singapore.
Let the legacy enshrined in Bukit Brown remain in times to come