And the music plays on

May 07, 2012
A malay metaphor tak kenal maka tak sayang (not knowing without loving it)
describes well a person who cannot understand or appreciate dondang sayang - he probably
does not know anything about it.

What actually is dondang sayang?

It is a form of traditional singing popularised in Malacca in the early  19th century, particularly among the Baba Peranakan (Straits-born Chinese)

The word dondang means singing, and sayang is love. Taken in its Malay context, dondang sayang is mengulit kasih (lullaby)

One significant characteristic of dondang sayang is that it must be sung in the form of pantun (quatrains or old fashioned 4 verse poems) to ensure its entertaining effect.

It is claimed that the pantun in dondang sayang depicts the courtesy, fine thoughts and emotions of the Malay.

According to Malay historical records, dondang sayang was originally a song in itself with its own melody and rhythm. It was introduced in the 12th century by Princess Wan Benai of BIntan in the Riau islands.

During the reign of the Malay Sultanate in 1377, dondang sayang was brought by the womenfolk who migrated to
Malacca where it was immediately embraced by the people there.

In later years, it was refined with the introduction of music to accompany the singing. The musical instruments then consisted of a rebab, rebana and tendawak, all are different types of Malay drums.

The Portuguese rule in Malacca in 1511 added the violin and later, the accordion, both Western musical instruments to the list.

Because of its past history, dondang sayang has Chinese, Persian, Portuguese and Middle East influences.

The development of dondang sayang went into a serious phase in 1870 with a version embracing the Malays, Baba Peranakan and the Indian Chettiars in Malacca. It was mainly performed at weddings and other native festivals.

In Singapore one of the most active dondang sayang groups is the Persatuan Gunong Sayang established by a group of Baba Peranakan in 1910 at Ceylon Road, Katong.

Prime movers of the group include Mr Boon Kim Yew, 67, William Tan 60. The late Gwee Peng Kwee was also a prime mover of this group. 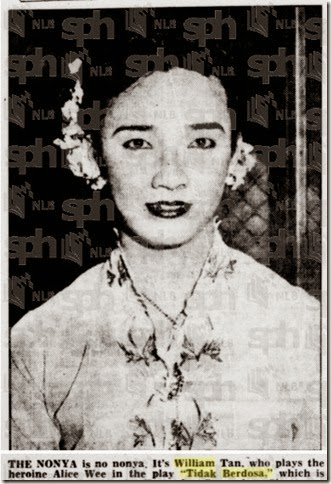 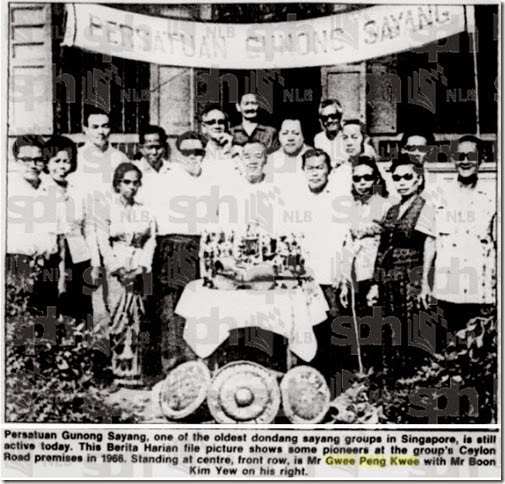 As a pantun expert, it had been one of Koh's wishes that dondang sayang should be sung at his funeral. Upon his death in 1956, his family members and close friends accordingly arranged for a “pantun party” at his gravesite in Bukit Brown cemetery. 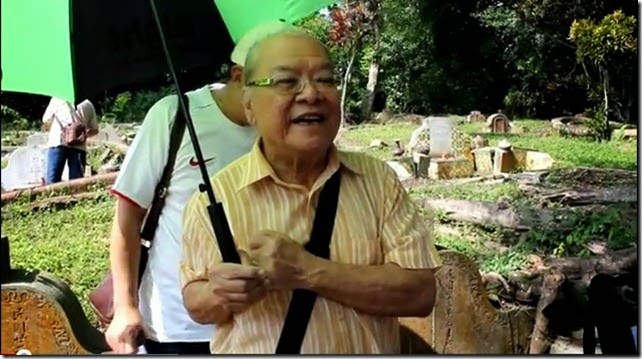 English Translation
If you go to Nona's house,
Do get for me a pomegranate,
This world is not ours forever,
From earth we came to earth we return.

G T Lye,  a nephew of Koh Hoon Teck, and son of Gwee Peng Kwee,  recited the same pantun that was said when Koh Hoon Teck died in 1956, and recounted stories of the Koh Hoon Teck's death and social circles. 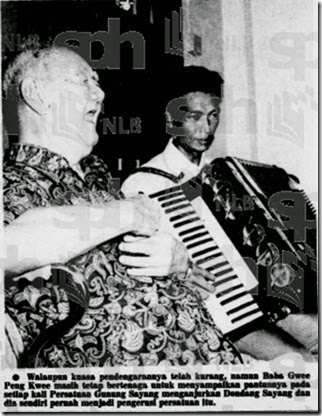 Gwee Peng Kwee was born on 24 Aug 1901 in New Bridge Road.
His father Gwee Eng Chuan, has 4 sons and 2 daughters. Peng Kwee was the eldest

His father Gwee Eng Chuan, passed away in 1914 when he was 42, leaving behind a widow Song Chwee Neo.

When Eng Chuan died, Chwee Neo got a gratutity of $2000 to raise a family of 6 children.

His uncle Koh Hoon Teck took them to live in Chin Swee Road.  It was then that Gwee Peng Swee was first exposed to Dondang Sayang.

In 1915, Gwee left school and start to work with his relative in the rubber store.

As for Song Chwee Neo, she would go to relatives' houses and try to sell a few things, dresses and other things.
She was able to supplement the family budget in this way.

In 1922, Gwee Peng Kwee joined a Literary Club. Classes were conducted by Song Ong Siang, and it was from Song Ong Siang that he learnt a lot of English under him. 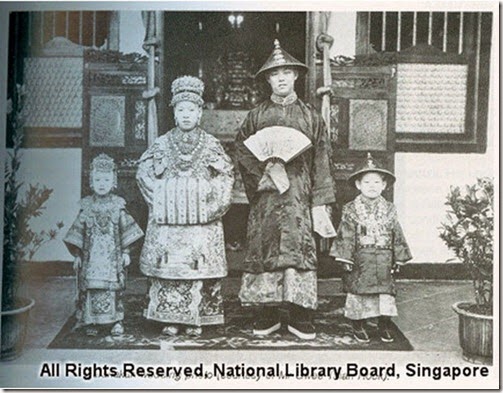 In 1940, they moved to Carpmael Road in 1940. One evening after his dinner in 1941, he was taking a walk and started to hear music. Yes it was Dondang Sayang, and a song he liked very much.
And then he met his uncle Koh Hoon Teck in the Club.

From there, he learnt from the pantun master Koh Hoon Teck, and soon became recognised as an expert himself.
‘I was at a wedding party with the dondang sayang players and I was invited to sing. A Malay gentleman agreed to start the singing and another from the party must reply. He directed himself at me: “Encik nyanyi dulu. Saya jawab.”

‘I was struck, I blushed. The music was playing and the audience urged me to reply. It was shameful. The Malay gentleman was asking:

Baba pandeh, saya tanya:
Bulan berjalan, mana kaki-nya?
(Baba is clever, so I ask of you:
The moon moves but where are its legs?)

‘I answered:
The moon moves not a length of padi,
The clouds move, the world revolves;
The moon moves through the power of God
The snake crawls, where are his feet?’

So profound an answer was given that soon Gwee’s formidable reputation as a stylish pantun composer grew.

On May 31, 1943, the woman who bought up 6 children,  Song Chwee Neo died.  Some of her sons became guardians of Peranakan culture, and Gwee Peng Kwee became

the champion of Dondang sayang.  William Tan was to acknowledge repeatedly that Gwee Peng Kwee was his mentor.

We will miss the sweet soothing voice of Baba William Tan. Among his contributions to the cultural scene of the Baba community were the three plays he directed: Buang Keroh Pungut Jernih (1985), Biji Mata Mak (1989) and Tak Sangka (1990); the sessions he conducted for the members of the Gunong Sayang Association; and the collaborations with authors on the Peranakan Chinese culture.
Performing with Baba William Tan was Nyonya Jessie Chiang and GT Lye. 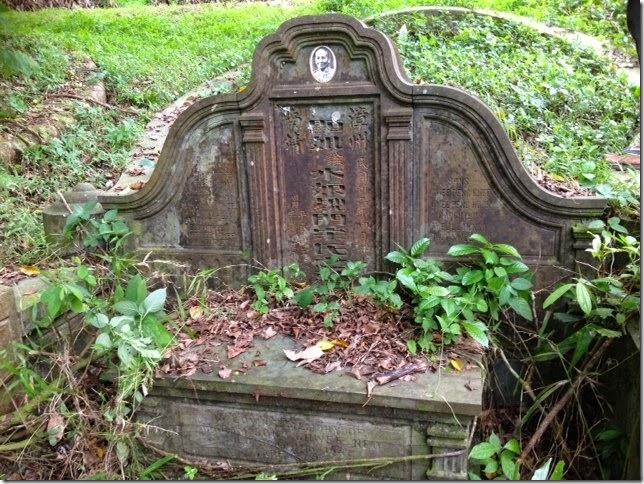 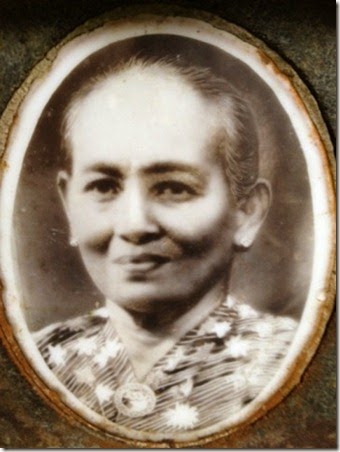 The nyonya with a sweet smile.  One of her sons Gwee Peng Gwee became the champion of Dondang Sayang.

Even during the occupation year in 1943 when life was difficult, he did not hesitate but to give her a good funeral and grand send off to Bukit Brown
where she was laid to rest, at a age of 70 years.

G loved her mother a lot, 15 years after she died, he still published in ST – In Memoriam. 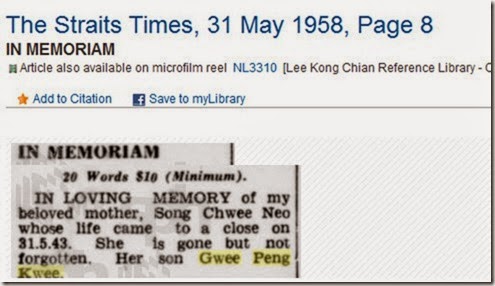 Her grandson, William Gwee Thian Hock, wrote some books on Baba culture for example A Nyonya Mosaic: My Mother’s children and also a dictionary of Baba Malay.

Another grandson, G T Lye continues the tradition his father Gwee Peng Kwee has left behind. 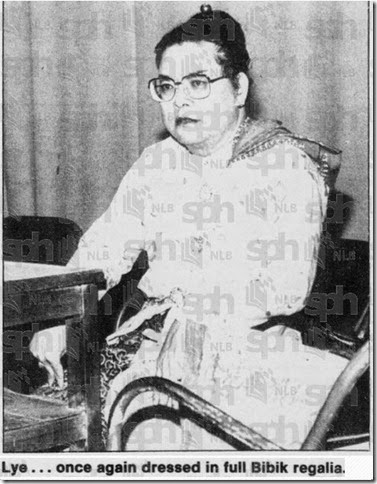 Mr Gwee passed away in 1986 leaving behind about 7,000 handwritten pantuns, most of which were his own compositions, in specially bound volumes. The majority of the verses have not been published. 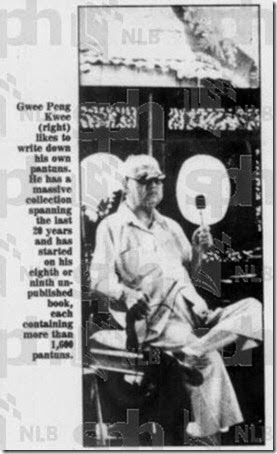 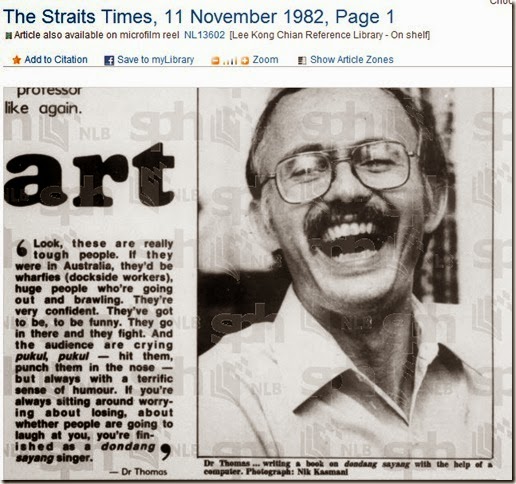 DrThomas
Dr Thomas, who wrote a book : Like Tigers Around a Piece of Meat

If you are always sitting around worrying about losing, about whether people are going to laugh at you, you’re finished as a dondang
sayang singer.