Dead end for tomb trade
As cemeteries make way for the living, businesses which engrave tombs by hand are struggling 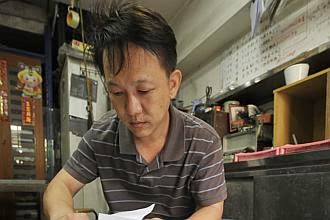 Stonemason Raymond Toh (above), one of the rare stonemasons who engrave tombstones by hand, uses tools such as an angle grinder. -- ST PHOTOS: RAJ NADARAJAN

Booting up his desktop computer to create a stencil sticker, Mr Raymond Toh, 42, carefully counts the number of Chinese characters in the design his client has requested.

If the total number is inauspicious according to a traditional five-character mantra he subscribes to, he has carte blanche to add or delete characters.

A maverick modern-day graphic designer? No, Mr Toh is possibly the only second-generation stonemason in Singapore who still engraves tombstones by hand.

'We may not know if fengshui is true,' he says, 'but I will not be able to rest easy at the possibility of the wrong inscription cursing the deceased's descendants.'

With cemeteries in Singapore making way for highways and high rises, Mr Toh is in a dying trade. He started learning the trade fresh out of school at 17, at a time when electric tools were starting to catch on, but modernisation has not completely smoothed over the difficulties of his job.

Hunched over on a low stool for long hours and stirring up clouds of fine dust, he has had lumbar surgery to fix a lower back injury and is at risk of developing pulmonary inflammation from the dust.

'In 10 years' time, we may just be making memorial plaques for niches with sandblasting,' he predicts. 'I won't say I'll be very sorry about it, even though this is a family business.'

The said family business is Toh Hong Huat Trading, a tombstone-making outfit in Woodlands Industrial Estate. His father, Mr Toh Ah Kim, has been self-employed since 1966, first running a stonemasonry business called Yeo Hoe Marble. He renamed it Toh Hong Huat in 1993, when the younger Mr Toh formally came on board.

As an apprentice at Bukit Brown Cemetery for 10 years, the elder Mr Toh earned 50 cents a day. He learnt to engrave tombstones by hand, chipping out names and dates on slabs of stone brought in from Malacca. The 73-year-old is now semi-retired, but still helps Raymond, his second son, in their workshop. None of his three other children is interested in stonemasonry.

Increasingly, craftsmen like the Tohs are becoming rare. Originally, stonemasons who carved tombstones worked either out of cemeteries or in areas such as Kampong Glam in Sultan Gate. Many have since been relocated to industrial estates such as Woodlands or Ubi.

The National Environment Agency (NEA) has a list of 19 registered monument makers in Singapore, but some have retired from the trade, citing less demand for traditional tombstones.

In 1998, the NEA introduced the New Burial Policy, which limited the lease period of graves to 15 years. Since 1993, only the government-run Choa Chu Kang Cemetery Complex has been in operation, although historical graveyards are dotted across the island. The short lease and the scarcity of grave plots have made burial an unappetising option for many. In 2010, there were 3,477 burials in Singapore.

Says the younger Mr Toh in Mandarin: 'In the 1990s, we would have orders for tombstones coming in every single day. Now, we make only two or three a month.'

Orders typically come from businessmen and older Singaporeans, who are known for their fidelity to traditional beliefs. Mr Toh's business has had to diversify by providing cremation services and metal engraving for sign-makers to keep afloat.

Other tombstone-makers favour sandblasting, in which fine jets of silica sand are sprayed at high pressure onto the stone to form the desired engraving. The method is ideal for smaller inscriptions, such as those on columbarium urns. On larger surfaces, the uneven depth of sand penetration makes the engraved letters rough. Despite this, sandblasting is convenient as it is fast. A hand-engraved tombstone takes at least a day to complete but sandblasting takes three hours.

Mr Soh Eng Chin, 49, is one stonemason who has given in to modernisation. He owns Sin Rong Stone Engraving Service, which operates in the same factory block as the Tohs. 'Ten years ago, all the tombstones we did were handmade, but now very few are,' says Mr Soh in Mandarin. He was apprenticed into the trade at the age of 13 and his late father also carved tombstones. 'We will do handmade tombstones only if clients request them.'

In a move that defies economic sense, Mr Toh charges the same price for hand-carved and sandblasted inscriptions - from $3,500 for a simple Chinese tombstone to more than $10,000 for larger and more elaborate designs. 'Those are mainly for clients in Indonesia,' he explains, pointing to a stack of 2m-wide granite slabs. Grave plots here are restricted to a standard size of 1.2 by 2.4m.

Indeed, Singaporean clients can be put off by huge tombstones of the past. Scrap metal dealer George Tan, 51, who buried his father in 2008, opted for a plainer Western-style tombstone. 'The modern tombstone does not look as scary as the traditional kind,' he admits.

Wryly, Mr Toh adds that other customs can come in handy. A traditional waiting period of 100 days after burial gives him more time to source for raw materials from his Chinese supplier in Fujian province and to prepare the tombstone itself.

After characters and designs have been carved onto the tombstone, they are filled with pure gold leaf. The gold comes in tissue-thin sheets of about 25 sq cm, which are sold by purveyors of traditional Buddhist iconography and cost $1 each.

Despite helping his father carve the tombstone when his paternal grandmother died, Mr Toh does not envision himself being buried as 'it's not practical these days'. Married to an insurance agent, the father of two has no wish to see his children, currently in secondary school, enter the trade. 'It's not an easy life,' he says. 'I want them to do better for themselves.' 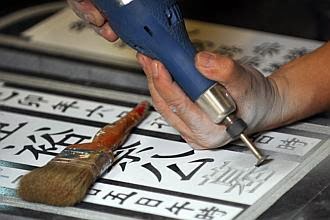 Stonemason Raymond Toh, one of the rare stonemasons who engrave tombstones by hand, uses tools such as an angle grinder (above). -- ST PHOTOS: RAJ NADARAJAN