Bridge will help, say some experts

Bridge will help, say some experts 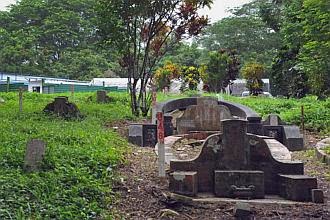 Some environment experts said more information on the exact species in the area needs to be gathered first in order to understand the impact of the bridge on them. -- ST PHOTO: NG SOR LUAN

SOME environment experts here believe a bridge that the Land Transport Authority (LTA) will be building as part of a road through the 200ha Bukit Brown Cemetery will help minimise disruption to the flora and fauna.

Preserving the environment would be better but since the LTA is going ahead with the road plan, more thought needs to be put into the design of this bridge.

Earlier this week, the LTA announced that a third of the planned road across the cemetery would be a bridge, to allow animals to pass under the road and preserve streams in the area. A 670m stretch of the road will climb up to 10m above ground.

Among the animals believed to be found in Bukit Brown are the sunda pangolin and monitor lizard.

The change comes after months of protests by civic groups, which have called for the whole area to be preserved for its heritage and biodiversity.

They argued that a road would disrupt animal migration patterns and vegetation in the area. After the Bukit Timah Expressway was built in 1986, slicing a vast wilderness tract in half, animals died trying to cross the road to search for food and mates. As animals have a role in pollinating plants and dispersing seeds, plant variety in the forest was also reduced.

The groups have called for a moratorium on all plans until discussions on possible alternatives have been exhausted.

Professor Peter Ng, 52, who co-edited the first encyclopaedia on Singapore's biodiversity, published last year, said that while traffic noise from the bridge may scare some animals away, others would adapt to the new situation.

Assistant Professor David Bickford, 43, from the Department of Biological Sciences at the National University of Singapore, added that in any case, many animals travel at dawn and dusk and in the night, when there is less traffic on the bridge.

But more information on the exact species in the area needs to be gathered first, they said, in order to understand the impact of the bridge on them.

The LTA had conducted a study on the road's environmental impact but declined to share the details of its report.

The Nature Society (Singapore) estimates that at least 91 bird species live in or frequent the area, including 14 species that are threatened.

'We need more data on the vegetation and other fauna such as mammals, reptiles and amphibians in the area,' said Dr Ho Hua Chew, the Nature Society's conservation committee vice-chairman.

But the bridge could cause other environmental problems in the area, said Dr Ho. The eight-lane bridge will cast a wide shadow, killing plants underneath, he said. 'The stretch will be bare and ugly over time, wiping out most of the species that are adapted to grassy or shrubby habitats,' he added.

Prof Bickford said if the linkway becomes barren, animals may not use it.

This could have further impact on the vegetation in the area. 'Some plants require animals to carry their seed,' said Dr Edward Webb at the NUS Department of Biological Sciences who specialises in plant ecology.

The experts suggested several measures to make sure the bridge serves its green purpose.

Thick vegetation on both sides of the bridge would insulate animals from the traffic noise and make the passageway more attractive to them, said Prof Ng, who is also with the NUS Department of Biological Sciences.

Prof Bickford suggested breaking up the expressway into two four-lane roads and making sure there is a sizeable gap between them.

'Let the gap be big enough to have substantial sunlight passing through. The light will hit different parts of the ground during the day and reduce the area that is in shadow all the time,' he said.

This would give vegetation a fighting chance and therefore make the linkway more attractive to animals, he explained.

The LTA said the road would have a gap but the exact blueprint has not been determined.