The Land Transport Authority (LTA) has finalised the alignment of the new road across part of Bukit Brown Cemetery following the completion of topography studies and grave identification works.

It said on Monday that the new road alignment minimises land take in the area and impact to the existing terrain and surrounding enviroment (see graphic below).

Given the undulating topography of the area, which has several small hills, a section of the road has been designed as a vehicular bridge over the existing creeks.
The bridge ensures that eco-linkage can be maintained, said the LTA. Under it, wildlife in the area can continue to traverse between both sides of the road.

The bridge section between the hills and across the existing streams will minimise the impact on the hydrology of the area.

The new road, which was announced in September 2011, will alleviate the congestion currently experienced along Lornie Road and the Pan-Island Expressway (PIE) during peak hours and cater to expected growth in traffic demand.

Construction of the new road will begin from early 2013 and is expected to completed by 2016.

While construction is ongoing, members of the public can still continue to enter the other portions of the Bukit Brown cemetery that are not affected by the road construction.

A total of 3,746 graves out of the more than 100,000 graves currently sited at Bukit Brown cemetery will be affected by the construction of the new dual, four-lane road , lower than the earlier estimation of 5,000 graves.

Registration can be done by post, fax, online, or in person. For more details, go to: http://www.lta.gov.sg/projects/bukitbrownsehong/index.htm. 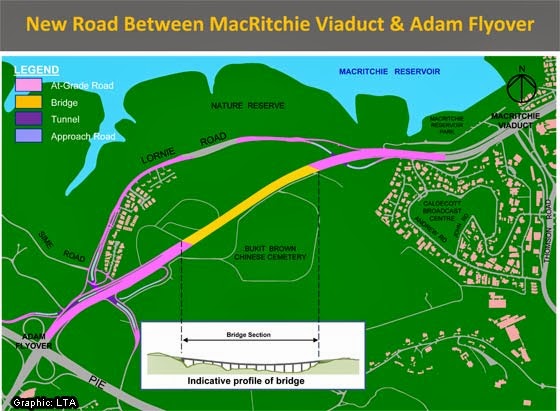