These tombs have the strange records of Block 1 Section A, Section 1 etc, and I could not find them in the usual Blk 1 sector.

I checked with one tombkeeper who looked after the war tombs, and he mentioned that due to lack of burial space in Bukit Brown, some tombs were buried at Coronation Road.
I looked at the 1944 Burial records and indeed on 3 May 1944, I found the first burial entry at the new cemetery, that of Teo Teng, 69 year old Hokkien.
He was buried at Blk 1, Section A, Tomb No 1.
This cemetery was named the "Chinese War Emergency Cemetery" at Coronation Road.
Thousands of people who died during the war years from May 1944 up to May 1947 when it was closed was buried in this War Emergency Cemetery. 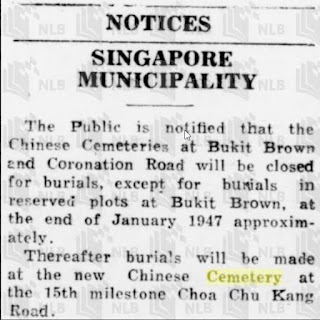 Thereafter burials will be made at the new Chinese Cemetery at the 15th milestone Choa Chu Kang Road
On 29 May 1998, an URA notice gave the final reminder for the registration of claim for the remains/graves at this cemetery in Coronation Road for land development. 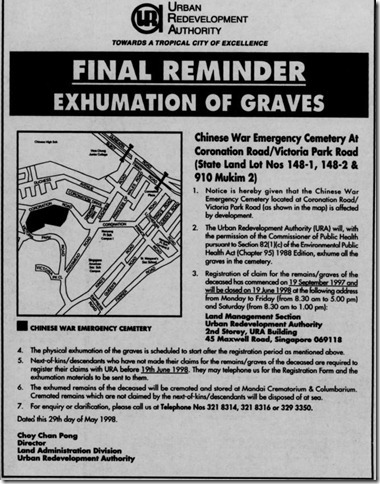 On 14 Apr 2000, 1634 unclaimed cremated remains from this War Emergency Cemetery was disposed at sea.
Needless to say, those who asked me to search for the graves and found that their loved ones were buried at the war cemetery and not at Bukit Brown were devastated.
They think all is lost at sea.
All About Bukit Brown Stories