Let the light continue to shine in Bukit Brown

It was an overgrown sector of Blk 1.   Therefore it was a pleasant surprise when I came across a triad of tombs, one with a cross, a Hokkien style tomb and a memorial plaque 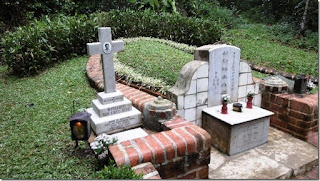 Nearby a lamp was lit.  I have seen the lamp lit before the last time I was there.
I walked around and saw an old man cutting grass nearby some tombs.  I talked to him and asked if he was tendering to his ancestors' grave.
No,  I was looking after my ancestors' neighbors.  I was surprised.  He led me to some nearby tombs of this triad, and point one by one each of these tombs.
"I always come to say hello to this little boy.  And this gentleman here"  The old man pointed to several neighboring graves.   "They are all my grandfather neighbors."
I was curious about the cross, the lamp, the memorial plaque and the tomb.
He was in talking mode that day,  perhaps he was surprised that I knew about this tomb with the light also. 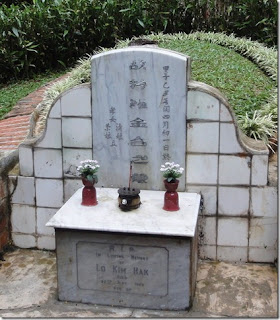 This is his story....
My grandfather Lo Kim Hak used to be a letter writer for the Sinkehs (immigrants)  in the past during the 1910 – 20s, just after the Chinese Republic was formed.
He was a very helpful person, and was well liked by the Sinkehs 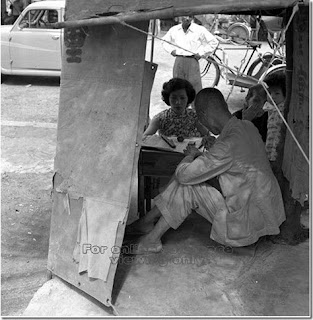 A letter writer (pic from PICAS)
Lo was well respected by the people, but he earned a honest living, he was very poor when he died young at the age of 37 in 1925, but the sinkehs and
neighbors put together $300 for him to have a nice marble tombstone
My grandfather then had married Gan Kwee Geok, who lived till a ripe old age.  Before she died, she became a Catholic. 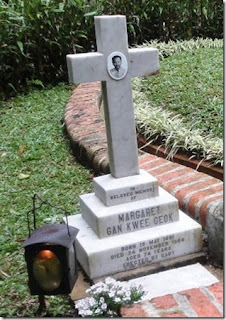 Margaret Gan Kwee Geok
I used to light a lamp for her whenever I came here. Although I am a Taoist,  I know she would be comforted by the light of the lamp.  The lamp can burn for 4 days.   Sometimes I read besides the tomb and the light, and enjoy the bliss and serenity of the quietness of the cemetery and the sweet nature sounds.
Lo and Margaret has 2 daughters,  one of them was Mary Low. 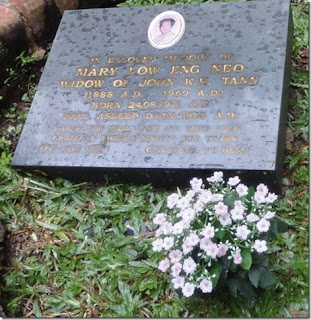 Mary Low was married to K H Tann, better known as Tann Kim Hock,  he was a cinema pioneer of the early days of Singapore, and worked for Universal Pictures
Tann is an unusual surname,  but Kim Hock preferred to add an additional N as he thinks the correct pronunciation of Tan should be Tann. 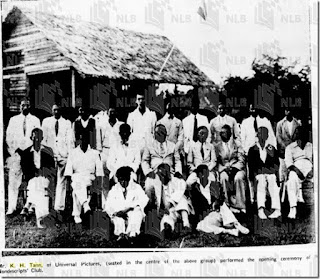 K H Tann, 2 Jun 1932
K H Tann was a well know cinema pioneer and film distributor, managing the Operation of Universal Pictures in Singapore.
On 9 Jul 1925, he even went to Bangkok, taking with him the picture "The Hunchback of Notre-Dame," which he was arranging to screen before the Siamese Royal Household
Kim Hock was the son of Tan Pong Guan, who was at one time secretary to the Consul General of China based in Singapore.
The old man continued his story ..
I was an adopted son of Tan Kim Hock and Mary Low,  my actual surname was a Ong.
But since they have adopted me and taken care of me, it is time I take care of them back.
This is a memorial plaque for my mother Mary Low, her ash is in a columbarium,  but I thought I would like to put the memorial plaque next to her father.
I don't understand why the Government is going to redevelop this place.   There is so much history and shared memories of our forefathers here.
Anyway,  I will always come and light up the lamp, and let the light continue to shine in Bukit Brown
Stories