Bukit Brown: Room for some flexibility

Bukit Brown: Room for some flexibility
Some requests can be accommodated but country's needs must prevail: Tan Chuan-Jin 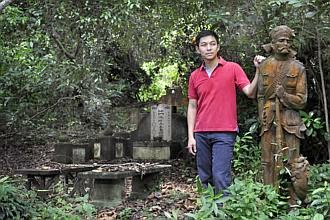 Mr Tan (above), who is Minister of State for National Development, said he would do his part to ensure that grave affected by the new road would be documented thoroughly. -- ST PHOTO: NURIA LING

'We could have done better, a bit more of these conversations and briefings when we announced some of these things, maybe get more stakeholders, and earlier.'


Bukit Brown will not be spared the bulldozers, but dismayed heritage groups and fans of the 89-year-old cemetery have at least some reason to cheer up now.

The good news: the promise of more room to manoeuvre when it comes to documenting the estimated 5,000 graves that will likely give way to a new road.

In an interview last week, Minister of State for National Development Tan Chuan-Jin said he would do his part to ensure that the affected graves would be documented in a thorough manner, even as the roadworks - slated to begin in 2013 - would proceed as planned.

'Dr Hui and his team will take the lead and work out the details, and we will support that,' said Mr Tan, referring to Dr Hui Yew- Foong, an anthropologist at the Institute of Southeast Asian Studies, who has been tasked by the Government to lead the cemetery's preservation effort.

There had been criticism that the Government should have consulted heritage groups before announcing the road plans. To that, Mr Tan said: 'We could have done better, a bit more of these conversations and briefings when we announced some of these things, maybe get more stakeholders, and earlier.'

The crux of his message - in his first media interview about Bukit Brown since the roadworks were announced on Sept 12 - appeared to be one of compromise. 'Going forward, we can do a bit more. I think that's quite doable,' he said.

Although Mr Tan, who is also Minister of State for Manpower, did not commit to specifics, heritage groups have in recent weeks made their wish list known publicly.

Top on the list is a re-alignment of the road, and more time for historians to document the graves; others include the storage, or relocation, of certain tombstones, and clusters of green areas to be kept as 'cemetery-parks'.

To these, Mr Tan was reluctant to say yes but he left the questions hanging, adding that he would consult Dr Hui on these matters.

On whether the road alignment could be altered if important graves are found to be in the way, Mr Tan said there would be 'some flexibility'.

He said that while he understood the public's desire to preserve what is historically meaningful, that desire must square with reality - that Singapore simply cannot afford to be overly sentimental when it comes to land.

Unlike countries like the United States, all of Singapore's needs - defence, housing, water catchment - have to be 'squeezed' into this tiny island.

'If I give up this space for this, it will be one piece of land less for something else... That's the reality that we need to contend with.

'The point is, how do we develop (land) sensitively,' he added.

It had taken the authorities three years to decide on the road at Bukit Brown, after throwing out more costly and complex alternatives such as tunnels and viaducts, he said. Plans to build the road were finalised only this August, and it was a decision not taken lightly, he emphasised.

In the coming months, Mr Tan said, he hoped the buzz about Bukit Brown will develop in constructive ways. For its part, the Government would also work harder to engage the public sooner, and on more issues - although not on so many projects that policymaking 'grinds to a halt', he added.

'You can't always consult, but there is a lot of space that we can,' said Mr Tan, who has led talks with stakeholders of the Rail Corridor project.

'It will take longer... but I think you will get better-quality policies.'

He encouraged more people to come forward and work with the authorities in striking a balance between development and conservation for Bukit Brown, although he did not elaborate. 'I don't just want to listen, I am able to do something about it. Not everything, but quite a number of areas, I can.

May 30: The Straits Times (ST) reports that Bukit Brown has been earmarked for housing.

June 11: Responding to ST Forum writers expressing dismay, URA says Bukit Brown is needed for future housing, and that many such 'difficult trade-off decisions' are made in land-scarce Singapore.

Oct 21: Singapore Heritage Society issues a statement on how the group was not consulted over whether Bukit Brown should be developed.

Oct 24: Officials meet privately with heritage groups to explain the Government's reasons for developing a new road, and reaffirm plans to go ahead.

Oct 26: Heritage groups and the preservation project leader, appointed by the Government, raise concerns over insufficient time given to document the graves.

Nov 3: Minister of State for National Development Tan Chuan-Jin explains the reasons for developing Bukit Brown in a media interview.