View from the top

special report
View from the top 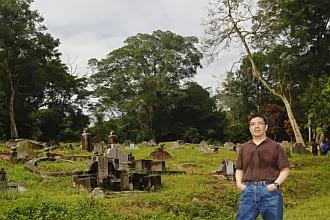 Mr Mok (above) produced a series of 3-D images of Bukit Brown using geographical data points and posted the images on a Facebook page for the cemetery. -- ST PHOTO: TED CHEN

Like most first-timers to Bukit Brown, Mr Mok Ly Yng's reaction on seeing the Chinese cemetery's gently undulating hills, was 'wow, what a wonderful view'.

Except, he wasn't physically there. He was at home.

The 'view' he was referring to, was a three-dimensional (3-D) screen image he had produced using geographical data points, rendered in commercial-grade mapping technology.

Mr Mok, 44, has one of the most uncommon jobs in Singapore - he is a freelance geographic information system (GIS) mapping consultant. Or, a map-maker.

As a long-time map enthusiast who has been a member of the National Geographic Society since 1982, Mr Mok's interest in Bukit Brown Cemetery was triggered after he came across some global positioning system (GPS) points posted on a Facebook page dedicated to Bukit Brown last month.

The GPS points were recorded by a netizen who had recently gone on a tour of the cemetery. 'I was interested in the details of his records, so I messaged him to ask if he would pass me the data.'

After that, the map-maker was hooked - as he probably knew he would be, he said.

But his interest in Bukit Brown was not simply map-related.The former Ministry of Defence (Mapping Agency) employee was feeling reflective as he had recently moved out of his Holland Village home.

'Did you know that Holland Village used to be a cemetery, too?' he said. 'Very hilly here, you see.'

Back in his room, Mr Mok dove into his library of maps and retrieved a topographical map sheet he had previously purchased from the British Library in London that showed the 3-D contours of the Bukit Brown site.

Using that data, along with other information about the area he was able to download from the Internet, he produced a series of 3-D images of Bukit Brown, which he later posted on the cemetery's Facebook page.

He also sent them to Dr Hui Yew-Foong, an anthropologist who is leading a team to document the graves.

Mr Mok said it took him three days to finish the images. He added that what he produced was very basic - a 'miniature preview' of what mapping technology can do.

Even so, to Bukit Brown's Facebook fans, what a wonderful view indeed.