Road across Bt Brown cemetery to go ahead 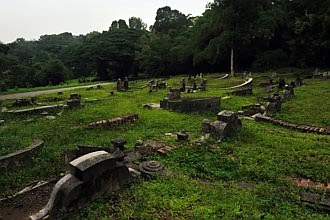 The graves at Bukit Brown will be documented by a working committee. The deadline for the documentation work is March next year. These graves will be exhumed in the fourth quarter of next year. -- ST PHOTO: ALPHONSUS CHERN

THE Government made clear yesterday that it is going ahead to build a new road that will cut through Bukit Brown cemetery, but it will commit resources to properly record the area's rich history.

Minister of State for National Development Tan Chuan-Jin gave the assurance at a meeting yesterday with more than 10 representatives from stakeholders, such as the Singapore Hokkien Huay Kuan, Peranakan Association and Singapore Heritage Society.

Mr Tan said the new road is necessary to ease growing traffic needs on the Outer Ring Road system, a network of major roads around the city.

'We are aware of the rich heritage of Bukit Brown and its links to the history of our country,' he said. 'We have sought to explore various possibilities for the road but there were no easy choices.'

The existing Lornie Road - next to the cemetery - is insufficient to cope with this growing demand, he pointed out.

The Land Transport Authority (LTA) announced last month that a dual four-lane road will be built by 2016. About 5 per cent of the more than 100,000 graves will be exhumed.

The Singapore Heritage Society clarified last week that it was not consulted in the decision- making process.

During the two-hour meeting, Mr Tan explained how the LTA had considered other options which were deemed unsuitable.

Widening Lornie Road further would require acquisition of private land and the removal of mature trees which could damage MacRitchie nature reserve, he said.

Another option is to build a viaduct over Lornie Road, but that would raise the question of where to divert existing traffic to.

Building a tunnel or viaduct through Bukit Brown would affect even more graves than a surface road, he said.

Mr Tan, however, assured stakeholders that the Government will properly record the history and memories of the affected graves.

An advisory committee comprising representatives from key stakeholders and government agencies, such as the Urban Redevelopment Authority (URA) and LTA, has been formed.

Dr Hui Yew-Foong, an anthropologist at the Institute of Southeast Asian Studies, will lead a working committee to carry out the actual documentation work. He was involved in the project to document 3,000 graves at the Kwong Hou Sua Teochew Cemetery.

The deadline for documentation of graves is March next year. These graves will be exhumed in the fourth quarter of next year.

Construction of the new road will begin in the first quarter of 2013.

In a statement, the URA stressed that aside from the upcoming road, development in Bukit Brown will not be immediate.

The area south of Bukit Brown around the Police Academy will be developed for public housing in about 10 to 15 years, said a URA spokesman.

The entire area will be developed for housing further in the future. The Straits Times understands that this will not take place till 2030 or 2040.

A Singapore Heritage Society spokesman welcomed the explanation. She said: 'This is really what we wanted to hear all along. It gives us a clearer picture of what's going on. The Government will need to convince everyone this is the best solution.'

The Singapore Hokkien Huay Kuan and the Peranakan Association said they support efforts to document the history and heritage of the site.