THE debate over the Government's development plans for Bukit Brown Cemetery has moved on to the campus.

It is now being used as a teaching tool in the Lee Kuan Yew School of Public Policy.

Last week, about 40 of the school's masters students in a class on public administration in theory and practice were assigned to analyse the Bukit Brown issue and write a 2,000-word policy memo by Nov 13.

The memo would advise the Land Transport Authority (LTA), one of the key agencies that announced the redevelopment plan last month, on how to move forward.

Assistant Professor Ora-orn Poocharoen, who has been teaching at the school for four years, assigned her students after she went on a tour of the cemetery on Oct 16. She was invited on the tour by Ms Claire Leow, a senior manager in the school's research support unit.

Said Dr Poocharoen: "The assignment fits into the topic that I've been covering in class on public values and public participation. It forces my students to be aware of the issue and to have an opinion about it."

Her students, many of whom are mid-career civil servants from other countries, have also studied the case of Beijing's hutongs (traditional neighbourhoods and alleyways) being demolished to ease traffic congestion in the 1990s.

Govt reiterates construction of road to start in 2013

On Monday, Singapore authorities reiterated that construction of a dual four-lane road through the cemetery will start in 2013.

The road is meant to ease traffic along Lornie Road and serve future housing estates that will be built in the area in 10 to 15 years' time.

The authorities added they have partnered stakeholders to set up a framework to document the 5,000 graves (5 per cent of the cemetery's 100,000 graves) that will be affected by the road.

Singaporean Fazlin Abdullah, 35, who is taking the class as part of her master's degree in public administration, said the assignment is a good opportunity to apply the theories she has learnt.

"Our previous assignments have also been along this line. However, this time around we are watching it unfold in real time. Although the memo we will be writing will be treated as hypothetical, it will be an exercise for us to prepare ourselves on how we can improve our analytical skills and prepare for policy cases in future."

Ms Leow said the Bukit Brown debate is a "live example" of the different factors involved in national-level decision-making. These include the value of heritage, the accuracy of projected development needs and the process of stakeholder consultation. 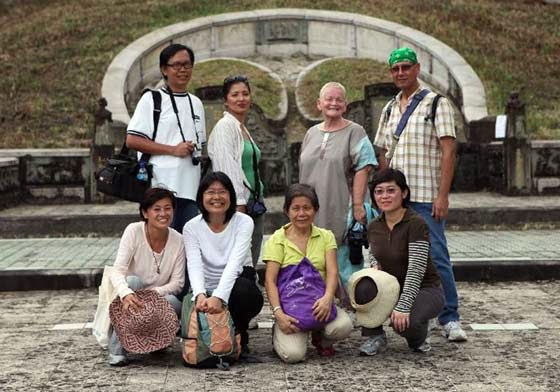 Above: Ms Claire Leow (front row, extreme left), on a self-guided tour with some locals and Australians at Bukit Brown Cemetery. Photo courtesy of Suki Singh.

She said greater transparency is needed so people can assess how the decision was made.

For example, she questions whether the 20 to 30 per cent increase in traffic demand along Lornie Road, which LTA projects will happen by 2020, takes into account the new Circle Line and upcoming Downtown Line in the area.

She said: "There are so many things we don't know, it's hard for members of the public to be convinced that this is right to do."

She recommends that the Government lay out the problems of traffic and housing so that both laymen and experts can come up with alternatives. The lessons learnt through this exercise can also be applied to future policy decisions in education, health or other areas.

She added: "Such engagement also contributes to nation-building and a sense of identity."

Dr Terence Chong, a senior fellow at the Institute of Southeast Asian Studies, hopes to see more public engagement over Bukit Brown in the form of volunteers helping with the grave-documenting process.

He said: "Bemoaning the intrusion of the road into the cemetery is not enough. Citizens can be pro-active by looking for their ancestors there or using the area for leisure activities like walking or sketching.

"This will make Bukit Brown a meaningful part of our everyday consciousness and lives, and not some abstract idea of heritage.