ACTS OF FAITH
If at first you don't succeed... 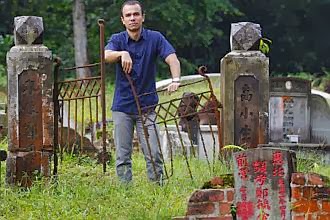 Dr Irving Chan-Johnson (above) has fought losing battles to save two other cemeteries from exhumation but is not about to give up on Bukit Brown.

After an online petition he started in June to save Bukit Brown fizzled with fewer than 1,000 signatures, Dr Irving Chan-Johnson now hopes an Ivy League polish will put life back into the cause.

'I am mailing it to my friends so it gets more international recognition, since I feel the issues we are dealing with are critical to humanity,' said the Harvard University graduate.

'This is a critical time in the history of the cemetery as the state has already made its stand pretty clear,' said Dr Johnson, 40, a Singaporean. 'The petition does not call for a compromise.'

The assistant professor of South-east Asian studies at the National University of Singapore has good reason to put his fists up - he's already had his heart broken twice.

The first was in 2008, when Bidadari Cemetery was exhumed; then, in 2009, when the Teochew Kwong Hou Sua cemetery in Woodlands Road followed.

To Dr Johnson, Singapore's burial grounds play an integral role in an individual's sense of nationhood.

In a letter published in The Straits Times Forum page in 2008, he wrote of Kwong Hou Sua's impending closure: 'Since independence, Singapore and its people have been on a constant quest to define a national identity.

'An integral part of any national identity is historical awareness.'

With the destruction of each cemetery, goes one slice of national history, he said.

To create greater awareness of Bukit Brown's historical significance, the anthropologist is also organising a symposium with the Singapore Heritage Society and the Nature Society on Nov 19.

It will feature heritage experts, including those currently working to document Bukit Brown's graves before next year's exhumation exercise.

'Hopefully, it will force the authorities to rethink their development plans,' he said. 'I want to point out to the state via the petition, that heritage management and definition are not the sole property of national governments.'