Honour ancestors before it's too late


State of the dead; Honour ancestors before it's too late

MADAM Rosalind Tan's perseverance in digging up her family's past has paid off - and has enriched her own life.


It took Madam Tan, 57, about two months to find the long-lost tomb of her grandparents in the vast grounds of Bukit Brown Cemetery.

With the help of tomb-explorer Raymond Goh, 47, and cemetery caretaker Lim Ah Chye, 41, she discovered the graves and, along the way, found out more about her own heritage.

In February, Madam Tan's brother visited the Land Registry at the Singapore Land Authority to determine the year of their grandfather's death, through his land title deeds and probate.
She later found out from a friend that the National Archives of Singapore held records of those buried at Bukit Brown. But her trip to the archives in early March did not unearth anything.

On March 26, she met Mr Goh during one of the tours of Bukit Brown that he and his brother, Charles, 43, organise for the public. The brothers are founders of Asia Paranormal Investigators, a society that researches paranormal activity and also organises tours to places of interest.

When she told Mr Goh about her quest, he urged her to make a second trip to the archives. She did so in April, and managed to retrieve her grandfather's grave plot number.

Madam Tan, Mr Goh and Mr Lim went to the cemetery on April 30, intent on finding the lost graves. A few days earlier, Mr Goh had spent two hours searching, but had not been successful.

It was no easy job, as the graves were on hilly terrain and hidden by dense undergrowth. Grave plots were not in sequence, and fallen trees along some paths made the going difficult.
That morning, it took another hour of scanning thousands of plots before Mr Goh, holding a grainy photo of Madam Tan's grandfather, found the graves.

Madam Tan's initial reaction was disbelief. She remembers sitting dazed at the foot of her apartment block for an hour when she went home that day.

It took another two months for Mr Lim to clean, scrub and restore the graves. This cost Madam Tan a few thousand dollars. Nothing was replaced except the faded photographs on the tombstone.
Madam Tan's grandfather, Mr Tan Yong Thian, is buried with his wife, Madam Ng Hean Neo. He died from apoplexy in April 1926, at the age of 71, two days after his wife was buried.

Born in 1855 in Guangdong, he arrived in Singapore at the age of 27. He was a building contractor who also invested in plantations, and later started producing essential oils. His firm, Chua Seng Heng & Co, was one of the largest producers of essential oils in the Straits Settlement in the 1920s. He is listed in Biographies Of Prominent Chinese, an encyclopaedia containing a few hundred entries of famous Chinese personalities.

The book was published in Shanghai in 1925, and only two known copies exist today. Madam Tan's older brother owns one copy, which was passed down to him from the late Mr Tan.
Madam Tan's father, Mr Tan Heng Chua, who died in the 1950s, is the fifth and youngest son. Her grandfather also had two daughters.

One of the late Mr Tan's grandsons is the late Mr C.C. Tan, former Straits Times Press chairman and lawyer.

His firm, Tan Rajah & Cheah, is still operating. His daughter, Ms Margaret Leng Tan, is a well-known Singaporean classical musician famous for her performances on a toy piano.

On June 26, Madam Tan and some family members gathered at her grandparents' graves to pay respects for the first time in more than 60 years.

Her older brothers - she has 13 siblings - used to visit the graves with her father. But after her father died when she was four, her mother, now 90, was too busy running the huge household to visit the graves.
Madam Tan's quest was inspired by her own name. She often wondered why her parents did not give her a Chinese name, and why her father was such an Anglophile. She discovered that he was influenced by her grandfather, who had dealt with business partners from America and Europe. After doing so much research on her grandfather, Madam Tan declares: 'I know him better than my own father.'

A grandmother of two, she spends her time as a museum guide at the Peranakan Museum. She also attends heritage talks, tours and weekly calligraphy classes.

She also visits her grandparents' graves once a month to 'keep them company'. She adds: 'I enjoy going there. I feel comfortable there; it's like visiting them at their home.'

She strongly encourages people to try and find their ancestors' graves before they are forgotten. 'Go before it is too late,' she says.
ateng@sph.com.sg 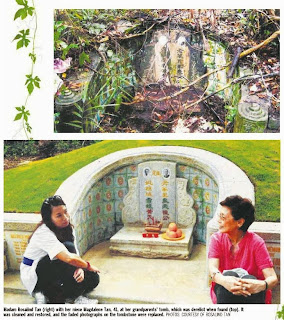 Madam Rosalind Tan (right) with her niece Magdalene Tan, 41, at her grandparents' tomb, which was derelict when found. It was cleaned and restored, and the faded photographs on the tombstone were replaced. -- PHOTOS: COURTESY OF ROSALIND TAN