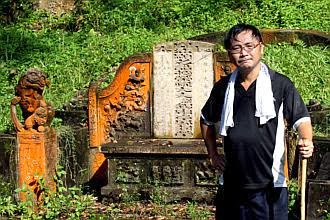 Mr Goh (above) does not charge a fee for helping to connect families to their lost relatives' graves, though he collects a nominal fee for tours of Bukit Brown. -- ST PHOTO: CHEW SENG KIM


Using social media, an expert guide of Bukit Brown is leading a digital revolution to put and organise information about the cemetery online.

Since the Government announced plans to cut a road through the burial grounds this year, Mr Raymond Goh, 47, has doubled efforts to preserve the memories of those who call Bukit Brown home.

This year, he set up bukitbrown.org - a kind of blog and e-database of the buried dead in Bukit Brown.

On it, the health-care company director scans and posts old newspaper clippings of obituaries and photographs, in the hope of connecting families with their long-dead kin.

Many of these documents are retrieved from the National Archives.

The process is a laborious one. Mr Goh often relies on scraps of clues - such as the deceased's birth date, or plot number - to piece together the history of someone.

To many then, Mr Goh is not just a guide, but has become a guardian to the area's forgotten graves.

Mr Goh began exploring the burial grounds in 2006, out of an interest for Singapore history.

He has not only helped connect families to their lost relatives' graves, but has also uncovered the tombstones of several pioneers, including Mr Gan Eng Seng, a businessman who founded Gan Eng Seng School, and helped to build Thong Chai Medical Institution and Tan Tock Seng Hospital.

Mr Goh does not collect any fees for his detective work, though he does charge a nominal fee to guide weekend tours in Bukit Brown.

He said helping to keep the memories of Singapore's early settlers alive was his reward.

'These people helped build Singapore. Some gave money to build schools, and hospitals. I just want to give something back to them.'

After five years of exploring Bukit Brown, the father of three teenage children knows the sprawling grounds like his own home. He visits every weekend. Sometimes, he pays tomb keepers to take care of abandoned tombstones; often, he scrubs them himself.

In a recent entry on his website, Mr Goh posted photographs and information about a Mr Kam Peng Huat, who died in 1941.

Mr Kam is one of several thousand who will give up their resting place for the new road by the end of next year.

Mr Goh wrote: 'He has five sons and five daughters. I am sure Kam Peng Huat has a very big family of grand- and great-grandchildren now.

'Some of their little ones may want to know more about their great-grandparents. But his lease in Bukit Brown has run out.

In a way, Mr Goh already has.