It was during one of the tours we held in Bukit Brown that we received some very interesting info from a tour participant.
There was a tomb in the prestigious Bukit Timah Estate, behind a row of private houses along Sian Tuan Avenue, and nobody there seem to know
who was buried there and why.
It was a case worthy of investigation, in current times where every inch of land is expensive in Singapore, is there still a tomb lying around in the Bukit Timah private estate?
True enough, we found an old tomb there: 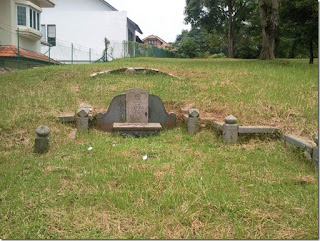 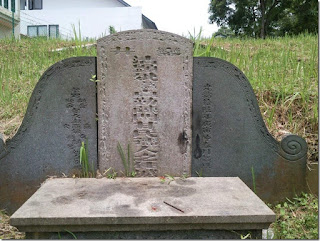 Tomb inscription and  deciphering
銮井 is a big Tan surname clan
The date of erection of tomb is 1890, in the 2nd lunar month
She is a Mdm Gan married into the Tan Family.
The name on the tomb is her posthumous name (谥号)
From the children name, we found out that there are
2 sons:
Tan Swee Kim, Tan Soon Kim and 3 daughters including a Sok Eh
From the names of the children,  we can find the names of these children mentioned under the will of Tan Quee Lan when he died in 1904 from the newspapers archive
We also dug more into the land ownership of the land whereby the  tomb was found and found out that the land did indeed belong to Tan Quee Lan
in the past.
Tan Quee Lan was a big landowner in the past, with fruits plantation along Bukit Timah Road.  He also owned properties in Club Street, so much so that at one
time the hill was called Quee Lan Hill
The land changed hand in 1938 from the grandson of Tan Swee Kim (who passed away in 1936 and transferred the property to his grandson Tan Jim Lay) to a buyer, other than the usual monetary transaction, there was one one additional special  condition mentioned below in accordance with the late will of Tan Quee Lan regarding the tomb.
The special condition 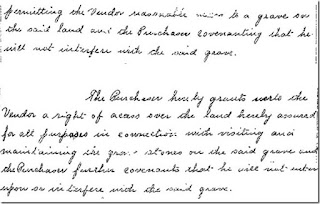 Eventually Property Developer Sian Tuah Properties Pte Ltd bought the land in 1982 and in 1987, the land was acquired by government in 1987.

From the above research, we can conclude that the said grave was that of Mrs Tan,
Mdm Gan, was the wife of Tan Quee Lan.  When she died and was buried,  Quee Lan made a will mentioning that whatever happen to the property thereafter,  the purchaser covenant that he will not enter upon or interfere with the said grave.  And that a right of access will be given over the land for all purposes in connection with visiting and maintaining the gravestones on the said grave.
It was the last show of love from a husband to a wife