October 24, 2011
The documentation will not just include the graves, but also the social history, memories and rituals associated with the cemetery and the exhumation process. -AsiaOne 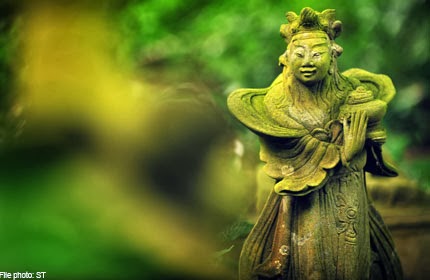 The Urban Redevelopment Authority (URA) and Land Transport Authority (LTA) will be working with various parties to document graves at Bukit Brown Cemetery.

Minister of State for National Development Tan Chuan-Jin said the Government is aware of Bukit Brown's rich heritage and its links to Singapore's history.

"We have sought to explore various possibilities for the road but there were no easy choices. Once the decision was taken on the road, we began discussing with key stakeholders.

"We aim to properly capture the history and memories of the affected graves and to do this before the planned road development begins," he said.

There are plans for a dual four-lane road to be built from early 2013 to link motorists travelling between Thomson Road, Adam Road and the Pan-Island Expressway.

This is part of redevelopment plans for the Bukit Brown area, The New Paper reported on Monday.

It is estimated that the new road will affect about 5 per cent of the more than 100,000 graves currently sited in the Bukit Brown Cemetery.

Mr Tan was speaking at a meeting with representatives from the Singapore Hokkien Huay Kuan, The Peranakan Association of Singapore, Singapore Heritage Society, academics and grave experts.

According to a statement jointly issued by URA and LTA, a framework will be established to guide the documentation of these graves to capture the history and heritage of the graves affected by the new road.

A Working Committee led by Dr Hui Yew-Foong, Fellow and Coordinator of the Regional Social and Cultural Studies Programme at the Institute of Southeast Asian Studies, will carry out the actual documentation work.

The documentation will not just include the graves, but also the social history, memories and rituals associated with the cemetery and the exhumation process.