A plea to the President - Discover your Roots in Bukit Brown


A few days ago, we saw you sitting at the highest chair in the parliament,  yes, you are the newly appointed president.
You have never disappoint your parents and ancestors, and they are certainly proud of you.
When you were a young student, you already excelled in your studies, in 1957, you were the top student in Singapore with 8 distinctions for the Cambridge School Certificate.
and in 1959 again you topped the Cambridge Higher School Certificate while in SJI.
It is a pity your father Seng Hwee died young,  at the age of 47,  in 1962. At that time your mother Jessie Lim has to bring up herself the 4 children.
But she certainly had a full and wonderful life,  and she died in 1999 at a ripe old age.   If there is one rule which she lived by, it was to get on with life,
as she has done with determination for 36 years after your father Seng Hwee passed away.
But your grandfather Cheng Siong died young too as he died at the age of 42,  just at the peak of his career as GM of Overseas Chinese Bank, and managing the United Sawmill Ltd, of which the directors included Lim Nee Soon, Ong Peng Hock and Lim Boon Keng
Your grandfather was a JP and a prominent citizen of the community, and was ever willing to give a helping hand in any charitable cause. 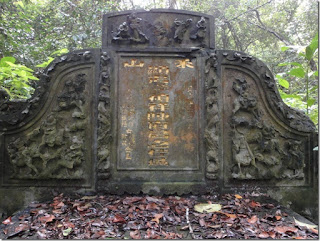 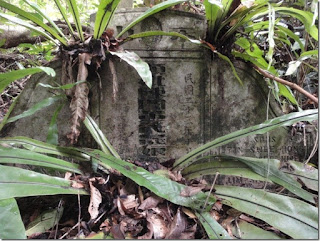 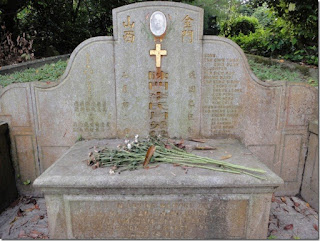 Lee Guay Eng's tomb
Now a bit of history to dig further to your roots:
You may not know, but in the past many years ago, there was a group of 36 businessman from Malacca who came to Singapore in the early days when Singapore was just founded.
This group of 36 young Hokkien Chinese baba traders, in their early 20 and 30s, from middle to upper income families most in Malacca, too came to seek their fortune in this new city.
Although they came from well to do families, business at that time was still considered risky. They have alliances with the Europeans, and can take goods on credit with them, but depending on
the business situation, they will have to pay the Europeans with equivalent goods or cash in a few months. Sometimes if the goods cannot be sold within this period, they would have to "lelong" the goods, resulting in financial problems for them hence the need to form such a mutual aid association for these businessman and their families.  This mutual aid association was Kheng Teck Whay.
Each of the 36 member would have to contribute 100 big dollars to the Association fund, which will be used as seed money for the businessman's families.
If a member would unfortunately passed away or fall into financial difficulties,  then this mutual help group would help the family.
Many of the 36 members did well in later life and have successful business. Some of them were managers of the neighbouring Thian Hock Keng. They constructed their HQ just next to Thian Hock Keng.
Together with Chong Wen Ge, the Kheng Teck Building and Chong Wen Ge formed the left and right pavillion of Thian Hock Keng.
One of the 36 founding member was Ang Choon Seng.
Now Ang Choon Seng was born in 1805 in Malacca. Set up Chop Chin Seng in Philip St. He had 2 sailing ships Patah Salam and Kong-Kek, travelling between Saigon and Bangkok. He  also have nutmeg plantations in Moulmein Road. 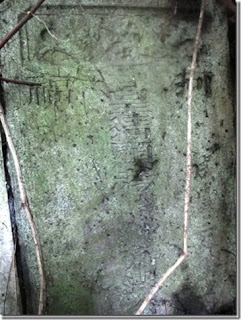 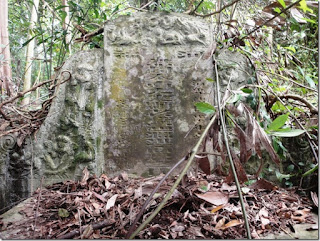 Tomb of Ang Kim Tee
From the tomb,  we can see that Ang Kim Tee has 5 daughters.   Do you know he married 3 of his daughters to Tan Jiak Kim because they unfortunately died  successively at young age?
The first daughter of Kim Tee married to Jiak Kim died in 1898, and he married then the 4th daughter of Kim Tee, Giok Yan.
Unfortunately Giok Yan died when accompanying Jiak Kim to England for the Coronation activities in 1911.  She was only 33.
At that time, they decided to buried Giok Yan there. As it was in Europe, the usual Chinese funeral rites could not be observed, and a European coffin
had to be used. No Confucian priest could be found to officiate, and the only Chinese accessories available were a candle and some joss sticks.
The next year, Jiak Kim married another daughter of Kim Tee, which is Geok Lan 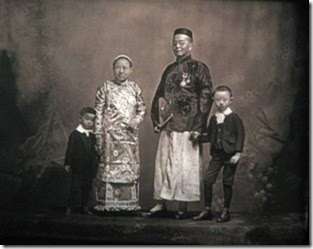 Tan Jiak Kim and third wife Geok Lan (also daughter of Ang Kim Tee) and 2 grandsons (pic from G.R. Lambert & Co)
Now the first daughter of Kim Tee married to Jiak Kim gave birth to a girl Tan Sun Neo in 1894.
Tan Sun Neo was married to Lim Kian Peng and has a daughter.
That daughter was Jessie Lim which was actually your mother.
So you can see you came from a very illustrious family, not to mention that Jiak Kim's mother See Keng Neo also comes from the illustrious See Family.
-------------
Do you know that all the above tombs were found in Bukit Brown Municipal Cemetery?   I think you probably have not visited the tombs of your grandfather and grandmother,
Perhaps you may not even know they are buried in Bukit Brown.    There are so many pioneers and forefathers of Singapore being buried there, that the list go on and on....
There is so much history yet to be uncovered in Bukit Brown, but recently you would have heard the news from LTA recently about redevelopment of Bukit Brown.
A new road is being planned to be right across Bukit Brown,  a road that will cover an area of 24 hectares and affect approx 10,000 tombs.
Did the relevant authorities did a proper historical survey of the place before deciding on this new road?   Or do they think it is just a cemetery?
Do you know that many tombs from the Qing dynasty era are relocated to this cemetery?  Tombs as early as 1833 and the mid 19th century can be found there.
Every one of those tombs tell a story, a story of birth, life and death, but in the end,  they are all builders of what modern Singapore is standing on.
Our roots and links to the past are all here, buried in this cemetery, many still waiting to be discovered.
It is only in the recent past, that people are just rediscovering their roots.
For us,  when we remember our roots from whence we came,  can we really love the country and the people that nurture us to what we are today.
This cemetery definitely has historical and social values of great significance to our young country.
The present generation seem to have forgotten about the past generation of nation builders and pioneers,  but the current generation's existence lies in the roots of these tombs,  the roots of which are going to be dig up for a road if nobody do everything.
So, please come,  dear President, please come to Bukit Brown.  It has been such a long time,  but I think your grandparents and other relatives are waiting for you to come and visit them, and remember your roots.
And in the meantime,  please try to let the authorities fully understand the implication of what they are going to destroy.  There is still time, although time is running out for the residents of Bukit Brown Cemetery.
It will be an irreplaceable loss.
From a Singapore citizen
Raymond Goh
on behalf of BBC residents
Stories