The road between heritage and progress

The road between heritage and progress 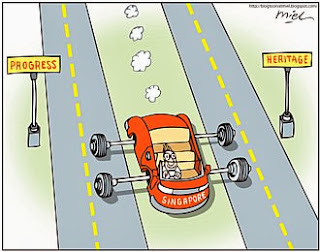 The road between heritage and progress -- ST ILLUSTRATION: MIEL

HOW I love Lornie Road. As a boy, I would travel weekly in dad's blue Peugeot on that road, from our home in Tanglin Halt to visit grandpa in Paya Lebar.
Years later, after I moved to the north-east, I would traverse that same road frequently on my motorbike to Holland Village to visit a girlfriend. This was followed, over time, by another 'long-distance' relationship that fused my bond with Lornie.

Today, when going over to the in-laws in the West Coast for Sunday dinners, I often choose Lornie over the quicker expressways.
The wide-arching tarmac and lush greenery on either side always relax me, no matter how hectic the day has been.

The scenery to and fro via Lornie Road has changed gradually over the years - the removal of roundabouts (including the beautiful Holland Circus which had a fountain), the exhumation of graves at Bidadari Cemetery in Bartley, the appearance of underpasses and viaducts, and so on.
The sweeping stretch from MacRitchie Reservoir to just before Sime Road - my favourite - has also changed.

There are now traffic lights (with one set at Sime Road leading to and from Singapore Island Country Club); and Lornie on the whole has been widened to accommodate a rise in traffic flow since the viaduct just outside Mount Alvernia Hospital opened.
Often, the road becomes too busy. As a result, it is losing some of its charm.

But hope is in sight.

Two weeks ago, the Land Transport Authority (LTA) announced that it will build an eight-lane arterial road that will cut through Bukit Brown, forming a high-capacity alternative to Lornie.
Construction will start in 2013, and be completed in mid-2016. Lornie will then be 'downgraded' to a lower-capacity carriageway - back to two lanes in each direction.

The freed-up space will be devoted to a park connector on the fringe of MacRitchie.

That, to me, is good news. The new road should cope with a growing traffic volume that Lornie is obviously having problems accommodating during peak periods.
With it, Lornie will, I hope, revert to what it was - a picturesque tree-lined boulevard that harks back to simpler times.

But the prospect of a massive road cutting through Bukit Brown Cemetery near the Lornie corridor has incurred the ire of folks who feel the site has strong heritage value. They point out that many of Singapore's first immigrants are buried there.

It is understandable that people are upset, even if the road project will affect only about 5 per cent of the more than 100,000 graves there.

I would not be thrilled if Choa Chu Kang Cemetery, where my Xiamen-born grandfather rests, was to make way for redevelopment. But I would also understand if there was such a need.

The reality is Singapore does not have the luxury of a vast hinterland. It will always have to balance competing needs for space, more than bigger countries. Difficult decisions will often have to be made.
Bukit Brown was earmarked for residential development by the Urban Redevelopment Authority (URA) as early as in the 2003 Master Plan. The area is sizeable, equivalent to some Housing Board towns. Its central location makes it a prime residential zone.

So, while detractors will point to other alternative sites, Bukit Brown's suitability for housing cannot be denied.

The same goes for Bidadari Cemetery, which dates back more than a century, and whose graves have been exhumed for a largely residential development in the future.

Like it or not, in a small city-state, the dead have to make way for the living.

What's important is that efforts are made to preserve their memory through proper documentation, archiving, and even memorials if the occasion calls for it.

It is pointless to pin a 'heritage' label on an area or a building if it will never be a part of our lives. Bukit Brown is, to all intents and purposes, tucked away into the far corners of our consciousness. Take a walk through the place and you will see that it is unkempt and largely overgrown.
It may be better to move some of the more prominent graves and perhaps display their artefacts to make them more accessible.

Take the case of 19th-century tycoon Ong Sam Leong, who is buried there. Why not erect a plaque or commission an artwork at or near the location of Bukit Rose, his once-magnificent house in Bukit Timah Road, if his descendants don't object? Why not celebrate a man's life and times when he walked the earth rather than preserve the spot beneath which he is buried?

A country with the luxury of land can let historic graves lie. But one with a limited surface area must wake up to the reality that present and future generations should take precedence.

Whether Singapore's population policy is right or wrong is for another forum. The fact is that we have more than five million residents today, and the figure could hit 6.5 million within the next decade or so.

Yes, heritage is important to a city. But heritage is best appreciated as a living, breathing entity that blends the past with the present in a relevant and tangible way.

It might be a better nod to heritage to designate Lornie Road - like Mount Pleasant, Mandai and South Buona Vista roads - a 'heritage road'.

And besides a park connector on Lornie Road on the MacRitchie Reservoir side, a heritage trail could be paved on the opposite side, with signs and sculptures bringing to life, as it were, our glorious dead.
christan@sph.com.sg
Debate