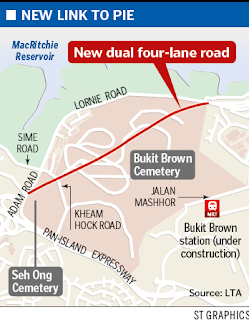 A NEW road will be built in Bukit Brown by 2016, easing peak-hour snarls along Lornie Road.

In a statement yesterday, the Land Transport Authority (LTA) said construction of the estimated 2km road - four lanes in each direction - is expected to begin in early 2013.

The road will start from Lornie Road near Caldecott Hill and cut through the existing Bukit Brown cemetery before joining Adam Road near the slip roads leading to the Pan-Island Expressway (PIE).

It will connect motorists travelling between Thomson Road, Adam Road and the PIE.

An LTA spokesman said currently between 6,000 and 7,000 vehicles per hour use Lornie Road during peak hours.

Traffic is expected to increase between 20 per cent and 30 per cent by 2020 due to future developments in central and northern Singapore.

'The projected traffic volumes would be well beyond what the current Lornie Road can handle,' said the spokesman.

The LTA has also observed slow traffic on the slip roads connecting Lornie Road and the PIE.
The spokesman said the project's cost will be known only after the tender - not called yet - is awarded.
After the new road is completed, Lornie Road will be downsized to a dual-two lane road, from four lanes going towards Adam Road and three towards Braddell.

The freed-up space will be used for future park connectors alongside the existing nature reserve.
Lornie Road functions as a link in the Outer Ring Road System, a network of major roads that allow motorists travelling between the east and west of Singapore to bypass the city.

It is also a vital connection between the PIE and residential estates in the central and northern parts such as Ang Mo Kio, Bishan and Thomson.

In its joint statement with the Urban Redevelopment Authority and National Parks Board, the LTA said various agencies have worked closely to plan an alignment that takes into consideration more immediate transport needs as well as long-term development plans for the area.

It said the agencies took care to avoid adversely affecting the nature reserves near MacRitchie Reservoir or acquiring private land for this road project.

It is also part of a road network that will support future developments in Bukit Brown.
The URA has already earmarked the area for future housing development due to its central location and proximity to established residential areas.

There are also plans for a future Circle Line MRT station to serve the area when it is developed.

The LTA estimates that the new road will affect about 5 per cent of more than 100,000 graves in the Bukit Brown cemetery.

It will call a tender this month to identify the graves and exhumation will take place in the fourth quarter of next year.

Motorists are happy that a new road will be built.

Piano teacher Jolly Liew, 45, said traffic flow on Lornie Road is quite bad after 8am on weekdays. She uses it up to three times a week during peak hours to take her father from their home in Clementi to his office in MacPherson.

On the way back, it can take more than an hour to reach home due to the congestion. She said: 'The new road sounds good. Anything to ease the traffic is good because traffic in that area can be quite bad.'
News