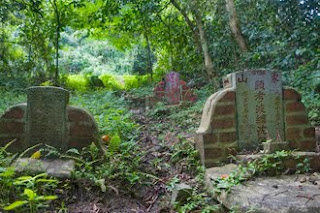 Activists are hoping that self-guided walking tours at Bukit Brown Cemetery this Sunday and next will help raise greater public awareness of the rich heritage found there. The site is set to be redeveloped for housing. -- ST PHOTO: TED CHEN

BUKIT Brown Cemetery off Lornie Road will be turned into a walk-through museum tomorrow and next Sunday.

Visitors who show up between 8.30am and 11.30am those two days can take a walk through the place, making stops at some of the more prominent graves, which will be marked out with placards.
The information markers come courtesy of Asia Paranormal Investigators (API), a society which conducts guided tours for small groups through the cemetery.

API is welcoming larger groups to the cemetery in a drive to raise public awareness of the rich cultural heritage buried in the mounds and grass there, on the back of the announcement that Bukit Brown has been slated for housing development.

API founder Charles Goh said he hoped that those who visit the cemetery will 'realise what they are losing'.
He added that the walk-through museum will be a fixture if the public response on these two Sundays is good.

Dr Irving Johnson, an assistant professor of South-east Asian Studies at the National University of Singapore who initiated the drive, said he plans to send the signatures with a letter to the President.
The Singapore Heritage Society (SHS) has also acted. It has produced a book titled Spaces Of The Dead:

A Case From The Living to document the cemeteries here and to argue for them to be conserved as open-air museums or parks.

And more than a dozen readers of The Straits Times have written to the newspaper's Forum page to weigh in on both sides of the issue.

The Urban Redevelopment Authority (URA) said last month, however, that the Government has to be 'very selective' about what to conserve because land is so scarce here.

It has not given a timeframe for the redevelopment, but plans for the Bukit Brown MRT station in Jalan Mashhor have already been drawn up.

A URA spokesman said the Government's land sales arm has noted the people's views, but added: 'While we cater for conservation, we also need to balance it against other needs in the community, such as housing for people.'

She added that Bukit Brown will be needed for housing, as it is centrally located and near established residential areas.

Those visiting the cemetery tomorrow or next Sunday can approach it from Lornie Road. From there, turn into Sime Road, which becomes Kheam Hock Road, and into Lorong Halwa, where the cemetery gates are.