Is there a middle path between the development and conservation lobbies? 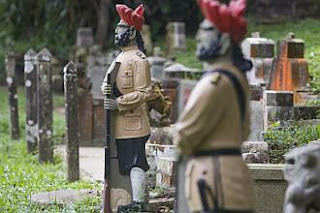 Statues of Sikh guards watching over one of the graves in Bukit Brown Cemetery. The URA has earmarked the 86ha graveyard for housing development, but historians and concerned citizens say its destruction will wipe out an invaluable piece of Singapore's past. -- ST PHOTO: TED CHEN

To some, Bukit Brown signifies a living history book and a wildlife haven. Others find it a oasis, away from the city's hustle and bustle.

Either way, most will agree that the cemetery, off Lornie Road, is the last of its kind.

Years back, Bukit Timah Cemetery made way for KK Women's and Children's Hospital, and Pek San Theng in Bishan is now chock-a-block with Housing Board flats.

The changes come against a backdrop of dwindling cemeteries. Available records show that in 1952, there were 229 burial grounds, including many small ones since exhumed.

Current records indicate there are 60 cemeteries, almost all of them small ones.

Unsurprisingly, a controversy is brewing around the recently announced redevelopment of Bukit Brown Cemetery in a case of 'the living versus the dead'.
The heat generated online and in the pages of the press captures the dichotomy between compact but economically vibrant Singapore's conservation and development aspirations.

The 'for development' stance, taken by the Government, stresses the need to use the 86ha of prime land to house our growing population in the long term.

The 'for conservation' stance, taken by historians and concerned citizens, say its destruction will wipe out an invaluable piece of a past social and historical life.

The Urban Redevelopment Authority (URA) says there are no intentions to conserve the site, and that plans are in place to build the Bukit Brown MRT Station at Jalan Mashhor, a stone's throw from the 80,000-tombstone cemetery.

An empty shell now, the station will open when the area is more developed.

In its response to concerned readers who wrote letters to The Straits Times, the URA explained that its hands are tied: while it shares the sentiments for conservation, it sees a need to strike a balance. The area is needed for housing, it says.

Critics do not buy into this argument. The Singapore Heritage Society has produced a book to document Singapore's cemeteries and has argued for conservation in the form of open-air museums or parks.

A petition by Dr Irving Johnson, an assistant professor at the National University of Singapore's Department of South-east Asian Studies, is being circulated to keep Bukit Brown intact.

Among suggestions made are calls for the Government to develop housing sites elsewhere, such as the golf course across the cemetery.

With both arguments equally persuasive, perhaps the solution lies in a middle path.

I personally love old things and would never replace the old-school pattern of mosaic tiles of my living- room floor with marble. And the idea of soulless glass windows in place of my impossible-to-clean diamond-shaped window grilles fills me with dread.

That is why I am a preservation sentimentalist. Save the squeaky old mesh Gillman Village bridge? Yes. The Tanjong Pagar Railway Station? We must. The Bukit Brown Cemetery? But of course.

Alas, reality is not quite so pat.

The cemetery's ageing tombstones are overgrown with weeds and potholes riddle its roads.

Planners do need to look at the situation a decade or two down the road, even if there may be no immediate need now to pump new housing into the market.

Indeed, even if the Government decides to conserve Bukit Brown fully, it would need greater public support - which is not the case now.

One other idea being floated is for the URA to gazette the site as conserved and sell it with this proviso to developers.

But profit-seeking developers might back off. Prospective buyers, too, may not want to be tied down.
Above all, current conservation criteria apply only to buildings and other structures with architectural merit. It would be a stretch to label tombstones as such.

Truth be told, Singapore still lacks a conservation culture. The hope is that, with time, this will change. But for now, perhaps partial conservation is the answer.

Some of the cemetery's green space, with its graves and weather-beaten trees intact, should be kept as a buffer between MacRitchie Reservoir and busy Lornie Road.

A green corridor should also be preserved for joggers and wildlife.

Notable graves should be given a second look and the area's role as a natural water filtration system for MacRitchie Reservoir should also be taken into account.

The good news is that the URA has not foreclosed an acceptable way to keep a part of Bukit Brown intact.
Over to you, history folk.
limjess@sph.com.sg