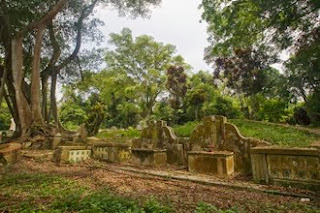 Many of the 80,000 tombstones at Bukit Brown are weather-worn and covered by undergrowth, but some draw attention with their size and showiness. -- ST PHOTO: TED CHEN, NURIA LING

IF HERITAGE enthusiasts have their way, Bukit Brown Cemetery off Lornie Road would stay untouched.
But in land-scarce Singapore - and especially since Bukit Brown is sitting on a large tract of land - the reality is that the dead will have to make way for the living sooner or later.

The 86ha graveyard, along with the already-exhumed Bidadari in Upper Serangoon Road, has been earmarked for housing developments, although the Urban Redevelopment Authority (URA) has not given a timeframe for this.

Already, plans for the Bukit Brown MRT station have been set, although it will remain closed until the area is more developed.

Meanwhile, the 200-member Singapore Heritage Society (SHS) has produced a book titled Spaces Of The Dead: A Case From The Living to document the cemeteries here and argue for their conservation in the form of open-air museums or parks.
To clear them away would cause the community to incur 'a great loss', said SHS president Kevin Tan, who edited the book.

But a URA spokesman explained: 'We have to take a balanced long-term approach in land-use planning, and be very selective in what we conserve because of our land scarcity.
'As our population grows, we have to meet increasing land needs for various uses. Bukit Brown and Bidadari occupy large land areas that will be needed for housing purposes, and are not included in our conservation plans.'

The 300-page book compiles articles and photographs of cemeteries by various authors.
Launched last Saturday, it aims to change the mindsets of two groups of people - town planners who might be thinking of exhuming cemeteries for redevelopment needs, and members of the public who might fear such places.

That cemeteries give important insights into a people's social and historical life is not lost on tourists, who are more open to visiting them.

'Such cemeteries are an intrinsic part of community life,' said Dr Tan, adding that tourists often visit a country's tombs to learn more about its people and culture.

When The Straits Times visited Bukit Brown recently, people on horseback from the nearby Singapore Polo Club were seen clip-clopping along the winding, vehicle-free paths, sharing them with joggers and dog-walkers.

Many of Bukit Brown's 80,000 tombstones are weather-worn and lost in the undergrowth. Some, such as the tomb of prominent Chinese businessman Ong Sam Leong and his wife, draw attention with their size and showiness.

Bukit Brown is among 60 cemeteries here. All but one - Choa Chu Kang Cemetery - do not accept new burials, said the National Environment Agency, which oversees many cemeteries here.

In 1952, available records indicated there were 229 registered burial grounds, including many small ones that have since been exhumed.

The bustling Ngee Ann City shopping centre and the housing estates of Bishan and Tiong Bahru sit on what were once burial grounds.

Mr Eric Cheng, 36, chief executive of real-estate agency ECG Property, noted that the sites on which Bukit Brown and Bidadari are located are 'prime spots for housing'.

Noting the precedent set here for turning cemeteries into housing estates, he said: 'These places are usually developed after the land has been fallow for some time. People forget they were ever cemeteries. It is not a challenge to market such properties.'

Former Nature Society (Singapore) chairman Ho Hua Chew, who wrote one of the chapters in the new book, conceded that SHS' cause was a tough fight because the Government is 'very pro-development'.

The avid bird-watcher, who noted that 85 bird species have been recorded in Bukit Brown, expressed hope that people would read the book and go there to appreciate the place.

Businessman and permanent resident Mark Zagrodnik, 47, who has jogged there, is already doing that. He described it as a 'beautiful, natural space'.

On the other hand, administrative officer Cathy Wee, 27, has not even heard of Bukit Brown. She said: 'I wouldn't even think of conserving it.' 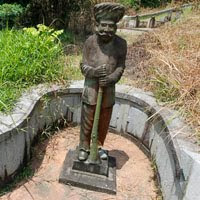 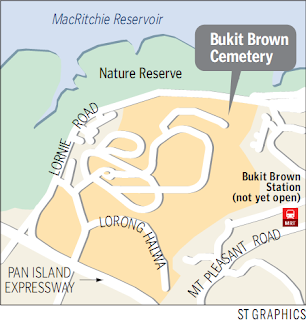