Apr 10, 2011
Buried: A life
Two brothers dig up the past with cemetery tours giving a glimpse into the lives of Singapore's pioneers
By Nicholas Yong 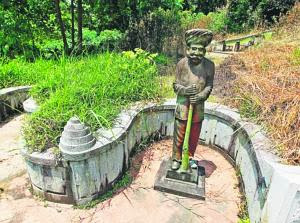 A 2m-tall Sikh guard watches over the remains of 19th-century tycoon Ong Sam Leong (above).

The graveyards are coming 'alive' again and it is not just due to the ongoing annual Qing Ming Festival, when many go to pay their respects to the departed.

A lively interest has sprung up in Singapore graveyards and their history, so much so that two brothers offer day and night cemetery tours based on request.

An average of 40 people a time happily shell out up to $45 each to be escorted by amateur historians Charles and Raymond Goh. The groups are a mix of young working professionals and the elderly.
However, the brothers stress that their cemetery sightseeing is not so much a quest for the dead but for living history.

Besides conducting the tours, the history buffs, who are licensed tour guides, also explore graveyards, some abandoned, in areas such as Choa Chu Kang, Bukit Timah Hill and MacRitchie Reservoir, on their own.
Even government agencies such as the National Heritage Board and the Central Narcotics Bureau have taken notice of their tours and organised such outings for their employees.

Teacher Martina Ong, 36, who has taken her secondary school class on the tour twice, says her students found the experience enriching.

'It was rather informative as they presented it from the point of view of history and culture, rather than focusing on the spooky bit,' says Mrs Ong.

Finding the dead is no easy task. Raymond, 48, a pharmacist, often encounters difficult terrain and has to bring a walking stick to clear the path of spider webs.

He says: 'I try to map out the area and bring a notebook to write down any unusual graves. The tombkeepers used to wonder why I kept coming back, but now that they know my reasons, they will try and help me.'

Based on the information engraved on tombstones, the brothers do research online, in the newspapers and at the National Archives in an attempt to unearth the history behind them.

Two weeks ago, they discovered the grave of businessman Ang Seah Im, for whom Seah Im Road is named, in the 80ha Bukit Brown Cemetery.

'It is always a pleasure to find familiar names. Bukit Brown is like a living museum. You get to stand in front of the pioneers and learn about history,' says safety supervisor Charles, 43.

Charles says the brothers hope to put the knowledge they have accumulated into a book someday. As it is, they often receive calls from members of the public asking for help in tracking down the lost graves of relatives.

The brothers estimate that they have explored only about 10 per cent of the 80,000 tombstones in Bukit Brown. Some are crumbling and overgrown, while others have undergone a recent 'renovation', thanks to Qing Ming.

They include the graves of 19th-century tycoon Ong Sam Leong and his wife, which occupy an area equivalent to 10 three-bedroom flats. Statues of lions, chambermaids and 2m-tall Sikh guards stand watch over the remains, which were rediscovered in 2006.

Nestled in a quiet corner of a private housing estate in Hougang, it was initially earmarked as a burial ground for what were known as karayuki-san (literally, Miss Gone Overseas) - young Japanese women who were sold in the 19th century and brought to Singapore as prostitutes.

During World War II, the remains of Japanese soldiers and civilians were also interred there.
Charles notes: 'Things are constantly being torn down and built up in Singapore but one of the places that remains is graveyards.

'They are like hidden gems, with stories waiting to be told.'
nicy@sph.com.sg
Grave tours
BUKIT BROWN CEMETERY (LORNIE ROAD)
Bukit Brown holds the remains of many Singapore pioneers including Chew Boon Lay, Lim Chong Pang and Lim Nee Soon, as well as Tan Kim Ching, eldest son of Tan Tock Seng.
It also includes what may be the oldest grave in Singapore - the final resting place of a certain Fang Shan, who died in 1833.
CHUA CHU KANG CHINESE CEMETERY
Many graves here are built in the shape of animals such as fish or snakes, in accordance with fengshui principles.
In the night, it also attracts many mediums and their followers, who conduct regular seances there.
JAPANESE CEMETERY PARK (CHUAN HOE AVENUE)
The land was donated by brothel owner Tagajiro Fukaki in the 19th century as a burial ground for Japanese prostitutes and is now maintained by the Japanese Association of Singapore. No one has been buried there since 1973.
Famous names interred there include field marshal Count Terauchi Hisaichi, supreme commander of Japanese forces in South-east Asia during WWII.
The graves of the Japanese prostitutes, their children and their mama-sans range from simple grave markers to elaborate tombstones.
To book a tour with Asia Paranormal Investigators, e-mail events@api.sg or call 9878-8669. The cost of a tour ranges from $20 to $45 and includes transport.