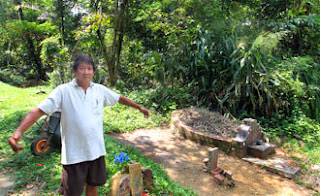 Tombkeeper Soh Han Seng, in his 50s, had lived in Kheam Hock Road Village, which sprung up around the cemeteries in the Bukit Brown area along Lornie Road to cater to the demand for the services of undertakers, tombkeepers and tombstone engravers. -- ST PHOTOS: LAU FOOK KONG


Like they have done every year for decades, the tombkeepers return to Bukit Brown Cemetery along Lornie Road for the Qing Ming festival, which fell on April 4 this year.
It is common practice for Chinese families to visit the graves of relatives in the weeks before and after the day itself, and the grave workers at Bukit Brown were waiting for them.
Armed with parangs, brooms, gloves and grasscutters, they clean and maintain many of the 80,000 graves over 80ha for a small fee. They also help families locate the lost graves of relatives.
The tombkeepers have a unique connection to Bukit Brown - many of them were born and raised there. They are the former residents of Kheam Hock Road Village, also known as the Kheam Hock Road Cemetery Settlement. The village was located in and around several cemeteries, which included Bukit Brown and the Hokkien Huay Kuan Cemetery.
The former villagers are carrying on the trade of their forefathers, who once provided services as undertakers, tombkeepers and tombstone engravers.
The village began with a single family some time in the 1910s, according to a 1968 geographical study done by Lin Gui Sheng and Zhang Wen Lin of Nanyang University.
With the setting up of two tombstone engraving shops to serve the needs of the cemeteries, those in search of work were drawn to the village.
By 1968, the village population had grown to more than 200 residents and included 10 engraving shops, temples, coffee shops and even a primary school. Villagers remember there was a car repair shop there by the 1980s.
However, the Government took back the land in 1982. The last villagers moved out in 1999.
Today, Kheam Hock Road Village is largely forgotten. Trees and weeds overgrow the former locations of villagers' houses. Jungle trails leading to nowhere dot the landscape and you can easily get lost without help from the tombkeepers.
If you brave the mosquitoes and venture in deep enough, you will see plenty of signs that people once lived here - the occasional zinc and attap hut, wells and even abandoned cars.
Almost three decades on, villagers recall a thriving community which raised livestock and grew its own fruit and vegetables. The mood in the village was liveliest during the festival of the dead.
'During Qing Ming, people from outside would set up stalls here selling food such as noodles and satay. It was like a pasar malam,' recalls Mr Soh Han Seng, in his 50s, in Mandarin. He still cycles to the cemetery daily from Potong Pasir to maintain graves.
Mr Soh's former home, which housed 40 people from three generations, was located just behind several graves in the Paupers' Section of the cemetery. The size of the family was typical of households there.
When asked if the villagers were uncomfortable about living so near the dead, the father of four says: 'What is there to be pantang (superstitious) about? They have been dead for so long.'
Many of the tombkeepers, such as production supervisor Lai, 52, who declined to give his full name, return out of a sense of duty.
Before his mother-in-law died, she instructed Mr Lai and his wife to continue maintaining the graves that she used to look after.
The couple come to the cemetery every three months, as some families ask them to look after their relatives' graves throughout the year.
Mr Lai was a regular visitor to the village when he was courting his wife decades ago. He says: 'There were houses scattered everywhere. It was quite a peaceful life.
'Now, when we come here in the morning, you can feel the fresh air. It is a change from seeing high-rise flats every day.'
Factory worker Oh Boon Keow, in her 40s, who took a month's leave for Qing Ming, shares the same sentiments.
For the past five years, Madam Oh, who has eight siblings, has been helping to maintain the graves that her late grandmother and uncle once looked after.
'I miss village life. We could plant fruit trees and do anything we wanted. But now that we live in a flat, we can plant only flowers,' says the mother of two with a laugh.
nicy@sph.com.sg