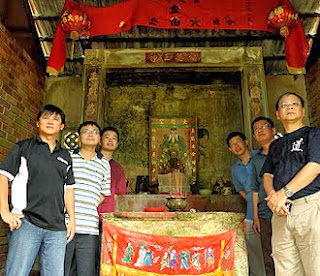 
At the dilapidated tu di gong temple in Bukit Brown Cemetery are (above, from left) guides Charles Goh, 41, and Raymond Goh, 57; Taoist priest Jave Wu, 30; National University of Singapore (NUS) adjunct associate professor of accountancy Tan Wee Cheng, 39; NUS professor of history and architecture Lai Chee Kien, in his 50s; and Yahoo group taoism-singapore founder Victor Yue, 57. The temple, discovered by the Goh brothers in January, is believed to be the place where visitors would pray first before visiting the graves, as a sign of respect to the earth deity in the area.

A MOTLEY crew of English-speaking professionals with a shared interest in traditional Chinese practices has come together to run a walking tour through Bukit Brown Cemetery off Lornie Road.
The guided tour through one of Singapore's oldest burial grounds, the first the group will conduct, is from 2pm to 6pm on Saturday, two days ahead of the start of this year's Qingming festival, when the Chinese visit the tombs of their ancestors to make offerings and to spring clean them.

The group, brought together online in 2004 via a Yahoo forum group, taoism-singapore, includes a National University of Singapore (NUS) professor of history and architecture; two brothers with a bent for the supernatural; a Taoist priest; and an NUS adjunct associate professor of accountancy.

Drawing on their combined knowledge, they hope to explain to participants Chinese traditions such as ancestor worship and burial rites, and the meaning behind tomb symbols - knowledge once held by Chinese immigrants, but which may be to the current generation little more than a cipher of burning incense, coloured buns and mock meat.

Group founder Victor Yue, 57, said the idea for the walking tour came about when he received several questions last month from people wanting to know more about Qingming.

'Rather than talk about it, I thought, why not show them?' said the technical engineer, who also runs two blogs on Chinese temples and sin tua, Hokkien for 'deity-shrines'.

The tour will be led by the group's tomb-exploring brothers, Mr Raymond Goh, 57, and Mr Charles Goh, 41, who are licensed guides.

Last Saturday, the group gave The Straits Times a preview of the tour through Bukit Brown, starting with a good hike from Kheam Hock Road into Lorong Halwa.

Of Bukit Brown's 80,000 tombstones dotting the grassy hill, many were modest, chipped and weather-worn, or lost in the undergrowth. Some commanded immediate attention, such as a large, womb-shaped one nestled amid its artificial 'lake' and a miniature 'mountain'.

The Taoist priest in the group, Master Jave Wu, 30, said the tomb, built for good fengshui, likely belonged to a rich man.

The Goh brothers then led the group to a dilapidated temple with a partially caved-in roof, which they said
they discovered only in January.

Mr Raymond Goh, a pharmacist by day, explained that the temple was the area's main tu di gong, or 'earth deity', where believers stopped to pray before visiting the graves.

He said it was built in the 1970s, but Dr Lai Chee Kien, the NUS history and architecture professor, noted that its style was that of late 19th-century Hokkien temples.

Accountancy professor Tan Wee Cheng, 39, said it was this kind of collaborative sleuth work that first drew him to the group.

Group members send e-mail messages - ranging from questions about, for example, the identity of a mysterious shrine in a Geylang back alley, to links to news reports about Chinese cultural practices, Taoism or other religions - to Mr Yue, who compiles them every day into an e-mail message which he sends back out to the entire group.

In the last five years, the membership of the group has grown from a handful to more than 500. The group counts veteran actress and theatre studies lecturer Margaret Chan and scholars from Malaysia, Ireland and Canada as members.

The use of English and their passion for the arcane subject are what unites them, said Mr Yue.
Another is nostalgia. 'With rapid urbanisation, many youths have lost the connections with their heritage, and parents may not understand it themselves,' he said.

'If we can offer our professional skills and knowledge to create a better understanding of our cultural heritage, that would be great.'

Members of the public interested in the tour can e-mail Mr Yue at tao.victor@gmail.com. There is a $5 fee to cover transport and refreshments.
zengyan@sph.com.sg