Tucked away in Bukit Brown Chinese Cemetery off Kheam Hock  Road, is a long forgotten grave with a 60 cm high granite headstone.

Two empty drink cans that held joss sticks indicate that someone still remembers the final resting place of a man known as Fang Shan.  It is on a small hill, amid creeper plants and weeds, one of about a hundred graves in the western section of the cemetery.
The red Chinese characters on the weather worn headstone says Fang Shan died in 1833, some 14 years after Sir Stamford Raffles first landed in Singapore.
Historians and history bluffs believe this may be the oldest grave in Singapore.
According to the National Archives of Singapore, which keep burial records, the oldest grave here dates back to 2 Apr 1865, and was at the Bukit Timah Road Old Cemetery, also known as the Kampong Java Cemetery.  The National Environment Agency said it was exhumed, together with the other 8,461 graves in the cemetery and the remains reburied at Choa Chu Kang Christain Cemetery in 1970.
There is one other contender for the oldest grave title.  In 2006, the Straits Times reported that a tomb dating back to 1842 had been found near the current National University of Singapore law school campus.
It contained the remains of  Chinese settler Qiu Zheng Zhi.  It was then believed to be the "oldest in situ Chinese tomb in Singapore", meaning that it remained at the site where it was first built.
Now cemetery explorer Raymond Goh, 46, believes the title should go to the grave of Fang Shan.  Mr Goh, who stumbled upon the grave in late 2008, said : "Although the Fang tomb is not the oldest in situ tomb here, its dating back to 1833 trumps the 1842 record". 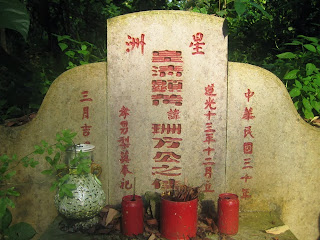 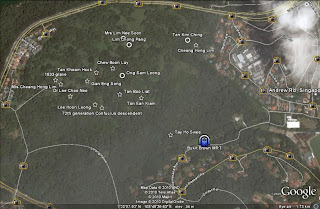 Gan Eng Seng (1844 - 1899)
He was a philanthropist who helped to set up and finance the Thong Chai Medical Institution, Tan Tock Seng Hospital and the Anglo Chinese Free School,
which later took his name.
Lee Hoong Leong (1871 - 1942)
He was the managing director of a shipping line owned by tycoon Oei Tiong Ham. One of his sons, Lee Chin Koon, was Minister Mentor Lee Kuan Yew's father
Lee Choo Neo (1895 - 1947)
She was the eldest daugther of Lee Hoon Leong and made history in Jun 1920  when she became Singapore's first Chinese woman doctor.
Chew Boon Lay (1851/52 - 1933)
The successful businessman owned pepper, gambier and rubber plantations.  There is an MRT station, a school and a housing estate named after him.
Cheang Hong Lim (1825 - 1893)
He ran opium and liquor businesses and donated $3,000 to convert the space in front of the old Central Police Station into a public garden, now known as Hong Lim Park
Tan Kheam Hock (1862 - 1922)
He was the Municipal Commissioner who actively called for the establishment of the Bukit Brown Chinese Cemetery.  The cemetery was officially opened in Jan 1922, and Tan was one of
the committee leaders managing it, before his death in Apr that year.  Because of his efforts, the road leading to the cemetery was named Kheam Hock Road
Tan Boo Liat (1874 - 1934)
The wealthy local philanthropist was the great grandson of Tan Tock Seng. He was the president of the Singapore Kuomintang and a strong supporter of Chinese revolutionary leader Sun Yat Sen.
His residence, The Golden Bell Mansion, still stands on Mount Faber, and is currently the Danish Seamen's Church.  Together with Dr Lim Boon Keng and a few other Straits born Chinese leaders,
Tan initiated the Singapore Chinese Girls' School
His grandfather Tan Kim Ching was also a charitable man.
Tan Ean Kiam (1881 - 1943)
He was a successful businessman and merchant, and also a philanthropist. He was one of the founders of the Overseas Chinese Bank Corporation. Ean Kiam Place was named after him.
Tay Ho Swee (1834 - 1903)

He owned sailing vessels and streamers, as he was involved in the plank shipping business as well as his father's opium farm.  Bukit Ho Swee off Havelock Road was named after him.